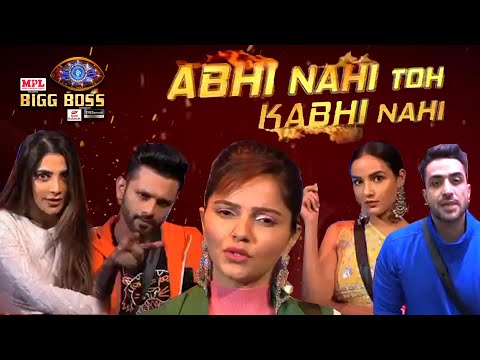 Devoleena responded saying that she did not believe in that even a bit. I guess it reminded her of what the makers did in her season. Kavita Kaushik again said that she did not know Eijaz Khan as well as he had claimed. However, he did not look surprised on seeing her back again inside the house. Nikki Tamboli, Rahul Vaidya and Jaan Kumar Sanu did not even react on her comeback.

He questioned her for pushing Eijaz with her elbow and told her that this behaviour is not acceptable. He said, ‘You are not in your senses, Pavitra.’ Pavitra tried to explain but Salman Khan told her not to say anything. She also said sorry but Salman Khan is seen saying that she can’t be saying sorry every time and doing the same thing again.

Naina’s friend Akash Choudhary spoke about her journey in the show and also spoke about her fight with Eijaz Khan. In an interview with Spotboye, he said, “Naina and I have grown up seeing Eijaz Khan. He is a commendable actor and we really respect him but now I feel that Eijaz is trying to show that angry young man, I stand for fair and all image. The whole brawl between Naina and Eijaz around that cigarette packet was unfair. “

He took to Instagram and commented about a few Bigg Boss contestants. He made fun of Eijaz Khan’s voice. He wrote, “Bhai samajh nahi aa raha ki pehle kya theek karwaya jaye, tere shoulder ka phatta hua ligament, ya teri phati hui aawaaz? (Brother, I can’t figure out whether to fix the torn ligament of your shoulder first or our your coarse voice).”