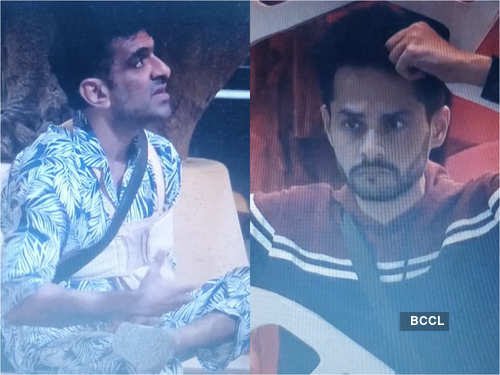 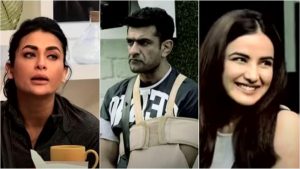 Bigg Boss announce about nomination. He says Eijaz is saved from this week nomination because he is captain of the house. Bigg Boss gives privilege to Eijaz to save one contender. Eijaz saves Jasmin from the nomination. He gives the reason that Jasmin came now from red zone and he don’t want to send her back to the zone. He quotes she also cook good food thus he wants to give reward to him. Jasmin gets happy. Bigg boss congratulate Jasmin and explains nomination task. 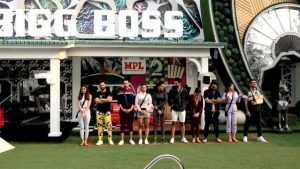 The nomination task begins where two contestants have to come face to face and tell why they deserve the oxgyen mask to survive. When the buzzer rings, the contestant with the oxgyen mask will be saved while the other will be in red zone. 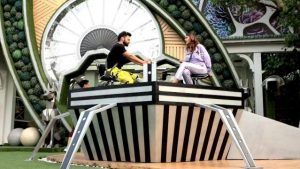 Rahul asks Nikki to keep the mask in the middle to play fair because she fetched the mask before he entered the ship. Rahul ask Nikki to keep the mask else he will snatch. Nikki asks him to snatch. Later, Nikki keeps the mask inside her pant. Rahul says she is playing dirty. Buzzer rings, contenders accuse Nikki for playing dirty. Rahul cries. Pavitra, Jasmin, Nikki, Rubina all accuse Nikki for keeping mask inside the pant. Naina says to Nikki she is testing boy patience. Jasmin says to Rahul by not defending back he won the heart and task too. 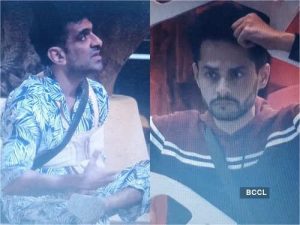 Shardul tells Eijaz that I don’t want to go like this from here. Eijaz says don’t think about leaving. Shardul says I took the mask from Naina out of instinct but then I fought with myself, I didn’t snatch it from her. Eijaz says Naina already won the show, she cares about her dresses and shoes but you care about her socks and underwear. You could have told her that you don’t have a house, you don’t have food, your mother is ill, you should have begged to her. I also need this show, I took 1.5 lacs from my friend to come here. You should not lose yourself, take your anger out in the right way. He hugs him and leaves. Shardul takes a small turtle and put it outside red-zone. He watches it as it crawls away.

Rubina vs Abhinav too 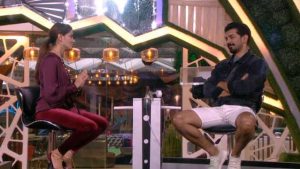 Rubina and Abhi sit on the seats. Rubina says you are my strength in this show, I can move ahead in this show because of you. Abhi says I don’t agree, if I am not here even then you will do well in this show. You can stay alone outside so you can stay here alone too, you are strong and you don’t need me. Rubina says I want you here, you are my oxygen so you will take this oxygen, I can be in any situation if you are with me.Abhi throws it at Rubina but she puts it back. Jasmin asks Abhi to take it, she is strong and she will fight. Rubina gives it to Abhi and says listen to me, please. You know I want you here. Abhi says if you think I am strong then I will fight and come back. Rubina says I won’t be able to stay here without you. Abhi says next time I will call the shot, are you sure? She nods so he takes the mask. Rubina hugs him.