No Elimination on Sunday; Salman Khan asks housemates to buck up 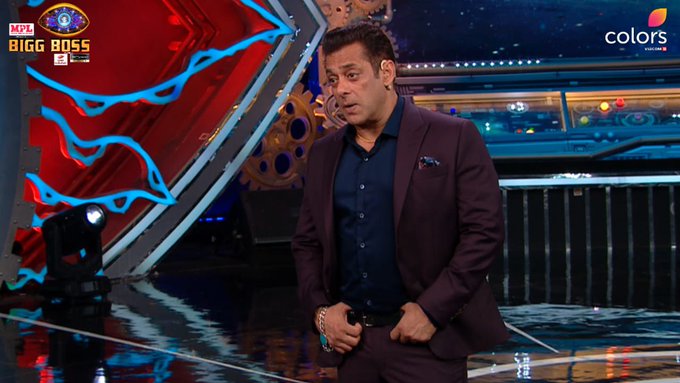 It’s that fateful time when the entire nation holds their breath in anticipation! The day for the first eviction from the Bigg Boss house has come, and it’s making the contestants anxious.

The first Weekend Ka Vaar episode of Bigg Boss 14 ended on a low note as the performance put up by the housemates until now failed to impress Salman Khan and the seniors — Sidharth Shukla, Hina Khan and Gauahar Khan. However, no one was evicted from the house on Sunday and the contestants have now been given one more chance to redeem themselves on the show. 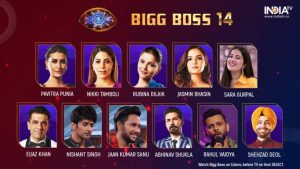 Salman talks about the tasks where seniors hear something spoken by freshers. The first person was Eijaz, second was Abhinav, and third was Nishant. Pavitra is upset that seniors are pointing out her name every time. Eijaz says he’s not offended. The next task is where seniors have to rate freshers. Pavitra gets emotional and starts crying. She then leaves and Gauahar gives her tissue, trying to explain her too. Salman teases Punia again.

Salman further says that ‘Seeing your passion, your passion and passion, we have decided why to waste one’s time. So the final decision is that 10 people of 10 pack their things and leave this house because it is a waste of time. Sad. ‘

Mumbai Indians in the house 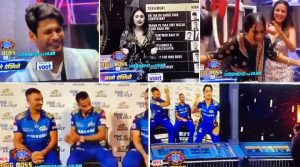 Salman introduces another game wherein the seniors have to guess which statement suits which fresher, and Abinav is sent to bring a ‘report card’ from the storeroom. Hina, Sidharth, and Gauahar tag Pavitra as the ‘perfect’ contestant for Bigg Boss.’ On the other hand, Sidharth and Hina call Rubina as a ‘disappointment,’ and Gauahar gives this tag to Abhinav. 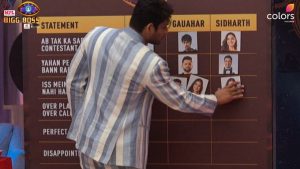 Meher calls Sid to bring Sara and Jasmin as a product and try to sell them. Tasks start with Sid. Sid manages to sell Jasmin. Jasmin wins the task. Sara gets the slap. Second, Gauhar is asked to sell; Jaan and Nishant. Nimrat says she is a big fan of Gauhar. Gauhar gets over whelmed. Nishant wins the task and Jaan gets the slap. Lastly, come Hina. Hina tries to sell Rahul and Eijaz to Meher and Sarab. Mehrab likes Rahul. Eijaz gets the slap. Meher praises Rubina and tells her; everyone is liking her outside, even she has turn her fan. Rubina gets happy. 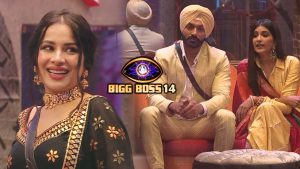 Later, Salman informs the viewers that Bigg Boss gave the contestants a task, where they have to judge each other, on the basis of their personalities. They have to stand in barricades of – Good, Average, Below Average, Poor, and Excellent. While the housemates complete the given task, but the seniors are utterly disappointed with their performance. Hina, Gauahar, and Sidharth lash out at the freshers for not taking a stand for themselves.

Salman comes in and points out their faults. He taunts the freshers for doing the task for namesake, and not fighting for their rights. Salman schools Nishant and Jaan for taking the ‘poor’ tag without battling for it. 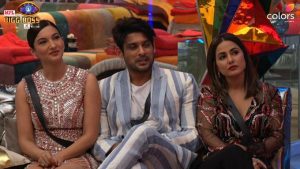