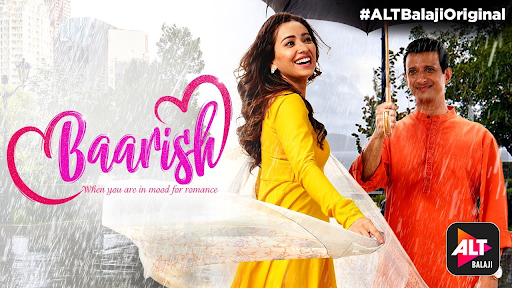 Baarish: When you are in the mood for romance is ALT Balaji and Zee5’s Hindi language drama series created by Ekta Kapoor and directed by Nandita Mehra starring Sharman Joshi, a Gujarati millionaire is a professional businessman and Asha Negi is a young Marathi middle-class girl who works as his employee. The two, being contrary to each other have unmatched personalities and completely different background and lifestyle.

As the story moves ahead, the plot destines to bring them together and due to the circumstances that take place leads to a final road to the marriage and being caught in the prison of love with each other. But then, there begin the building blocks of problems and obstacles they had never expected from various bearings.

By far, the series has produced 2 seasons and a total of 40 episodes. The origin of season 1 was on April 25, 2019, and has an IMDb rating of 8.6 out of 10. The show received bucket full of rave reviews and positive comments by the critics as well. Season 2 came out this year on May 06.

Thus, the viewers are highly expecting for a season 3 but now will be to too early to state anything regarding its season 3. The final announcement has to be made and then only, we can count the remaining days and wait for the release. Period of one year or more should be the time gap between the subsequent seasons. As per few reports, the series is probably gonna hit the floors in April 2021.

Season 3 will be comprising the same caste who were in season 1 and 2 with some few changes in the actors not in pivotal roles.

Battling the uncertainties and chaos of life, sharing the intended love, and care and coming out through the meander of this thing called love is what the show depicts. Season 3, hopefully is gonna be filled with the ways to win over the feeling of love again and getting strong supporting hands from the family and friends.