VIPIN SAHU- The Paragliding man as a contestant of the Roadies Revolution. 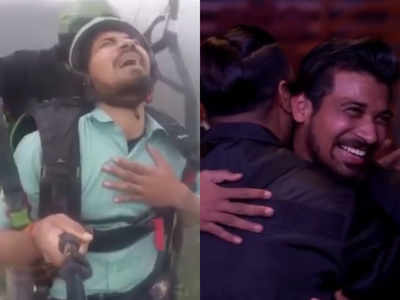 Before I start telling you everything about Vipin Sahu, let me remind you he is the paragliding man who got viral for his video “Bhai land kara de, 100-200 extra lele par land kara de”. Yes, you got this right. He is that Vipin Kumar. The man who knows “His fears are his strengths”.

Vipin Kumar, the viral guy was born on 15th March 1996 in Banda, Uttar Pradesh, India. Born and brought up in a Business family, Vipin has done his schooling from GIC, Banda, U.P., and pursued his higher studies at Bundelkhand University, Jhansi, the historic city in the Indian state of Uttar Pradesh. Vipin received the spotlight after becoming a participant in the 18th season of MTV Roadies: Roadies Revolution. Though he was already in talks after he went viral through his funny video “Land kara de”. The video went so viral that the judges themselves did not fail to recognize him and as soon he told about himself that nowadays he is also known as “Paragliding man”, all of the male judges came running toward him.

The 24-year-old Vipin Kumar was born in Banda, U.P., and after completing his studies, he has been working as a Business and a Youtube content creator. The channel is named “The Paragliding Man” with 180K subscribers. Vipin’s father’s and mother’s name is not found yet. He has two siblings in his family i.e. one brother named Pawan Sahu and one sister named Naina Singh. Apart from Roadies, he was seen in-

WHAT MADE THE JUDGES SELECT HIM:-

At the audition of the Roadies Revolution when asked about what kind of revolution he could do or change he can bring into society, he answered that the four essential sources of surviving life: Food, Cloth, Shelter, and Job, providing the basic amenities to needy is what he wishes to do and let others help him too. He further said that he is currently providing food, Job, and cloth to the poor through an NGO named “Hand for Humanity” by donating 5% to 8% of his earnings on monthly basis. More than 50 people are fed with his helping hands in the regions of Lucknow, Banda, and one more yet to be confirmed. Through Roadies he wants the world to see his other side rather than knowing him for his viral video only. He knows everybody has their fears that should not be inferred judged or underestimate the person in any way. He showed his physical strengths and seeing his politeness and strong spirit, the four out of four lights went on.

Also, he has stated that he is looking forward to Skydiving as his next thriller experience. Let us stay tuned and see what potential does he possess for becoming a true roadie.