TVF Pitchers Season 2: Reviving or not? 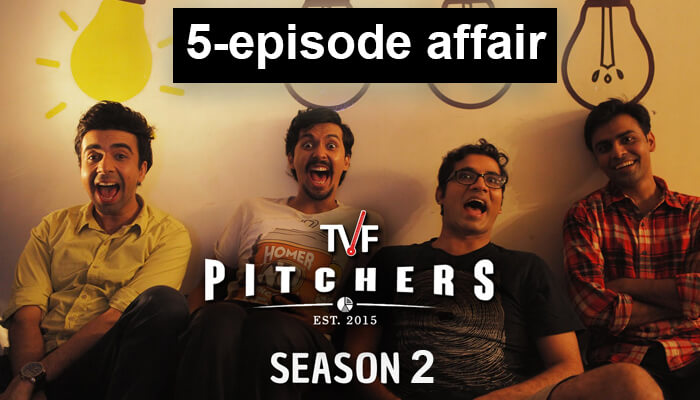 The Viral Fever brought an amazing digital platform based series having a 5 episode affair named Pitchers in the year 2015 with its first episode premiered on June 05, 2015. It released on TVF’s content portal TVFPlay and consisted of a total of 5 episodes. It has the IMDb rating of 9.1 out of 10. Ever since the first season released, the viewers have been longing for its second season to arrive soon as it received ample of positive reviews from the critics and collective amount of love from peeps. And it has a great fan base for its admiration.

The series is concerned with four guys who quit their jobs with a view to start their own start-up company. As the series of circumstances and events occur, they discover what they actually want in life instead of a regular job which somehow brings them together and they begin wiping their sweat off for their new plan along with facing the various challenges that take place in order to meet up to what they want to do.

When the trailer came out, everybody compared the plot to the American comedy television series “Silicon Valley“. However, as soon as the pilot premiered the audience apprehended it was not like what they thought. In fact, later the founder and CEO of TVF expressed himself to the Huffington Post that if there is any American TV show that actually inspired the making of Pitchers (not the content-based but its spirit), then it is the HBO drama “Entourage” based on a young Hollywood star rising to the top.

In the year 2016, at the time of December, a teaser revealed that finally the second season will be out and we already started expecting the sequel in the year 2017. Now its been three years and there is not confirmation made regarding season 2 yet.

In an interview, Naveen had stated that the sequel may be speculated somewhere in March 2018 but by far we still lack the confirmation of it as the filming was put in a pigeonhole. But the Web Series Expert says the series will be renewed in the year 2021.

Season 2 will have the same cast as the previous one as the story will be continuing from where it came to rest.

The group is a step away from their seed fund. The storyline will move ahead and we will get to watch if the gang is succeeded on their way or not. Will the company run? Or will there be any more difficulties to deal with? We will get the answers to all our heavy for our minds questions.