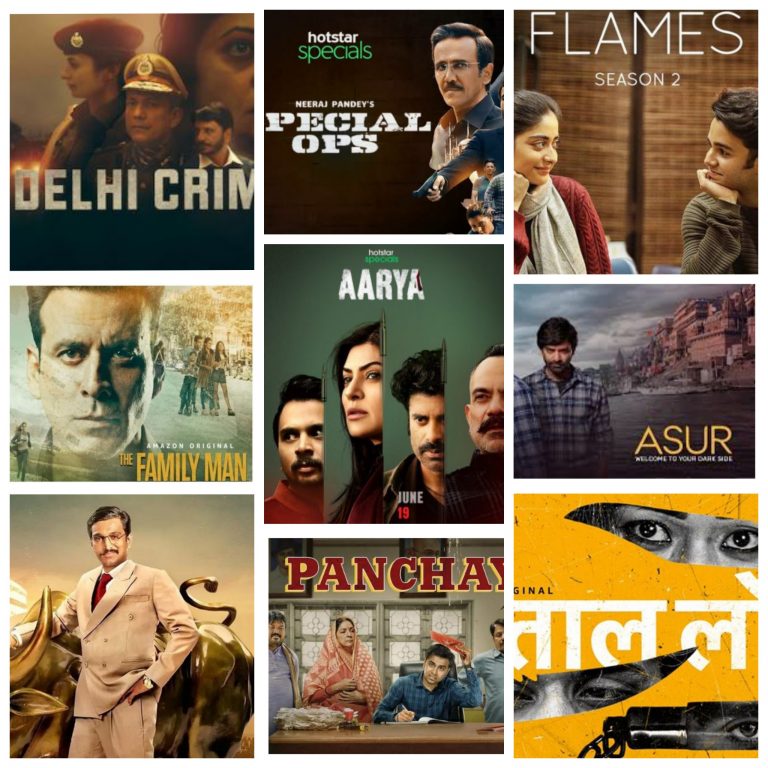 This year has been hectic. We all want this to wrap up as soon as possible. But looking at it in a wider perspective 2020 has provided us with some brilliant and unique web series that put the bars of excellence to a higher level. Give a glimpse below to the top 10 web series.

Since the release of Scam 1992 on Sonyliv, the show has been a huge hit among its viewers. The show’s cast also received praise for their achievements. The story of the series is adapted from Sucheta Dalal and Debashish Basu’s book The Scam: Who Won, Who Lost, Who Got Away.The series stars Pratik Gandhi, Dhanwanthary, Hemant Kher and Nikhil Dwivedi in prominent roles. It is based on a scam executed by stockbroker Harshad Mehta in Bombay in the 1980s and 1990s. The 1992 Review describes the meteoric rise and catastrophic fall of Harshad Mehta, leading to a market crash. The series received highest IMDb ratings among other Indian web series.

2. Asur: Welcome to your dark side.

Asur: Welcome to your dark side is a mythological thriller featuring Arshad Warsi and Barun Sobti. The series was released on Voot Select. The story revolves around a forensic scientist who became a teacher, Nikhil Nair. He returns to the CBI to catch a brutal serial killer. It tries to portray the battle of wits between a Psychopath killer & two forensic experts. It is one the highest INDb rated web series.

Aarya makes a mark of Sushmita Sen’s comeback as well as digital debut. Critics and audiences praised Sushmita for her outstanding performance on the series. The show follows the story of Aarya, whose husband is a drug dealerand is killed by a masked man. Now she takes over the responsibility of running his drug empire and getting justice for him. The show is live on Disnep+Hotstar.

Delhi Crime is an Indian crime drama based on the events following the horrific Delhi gang rape case in 2012. It focuses on the police investigations that were undergone to uncover the real crime of rape and murder of a woman in Delhi in 2012. The show is released on Netflix. IMDb rated it 8.5 out of 10.

Special Ops is a spy thriller by the digital debut filmmaker Neeraj Pandey. It is based on Himmat Singh from the Research and Analysis Wing (RAW) who is convinced that a single person is behind all the attacks and the crimes. He leads five agents under him living in various parts of the world. They all plan to catch the mastermind behind the attacks. The show streams on Disnep+Hotstar. The show is highly rated.

The Amazon series is based on the character of Hathiram Chaudhary, a Delhi Police cop. He is given a case where four suspects are nabbed in the assassination attempt of a journalist. It joined the list of top Indian web series within a glimpse of its release. The show grabs your attention till the end.

The comedy-drama tells the life of an engineering graduate who works as a panchayat secretary in a remote village in Uttar Pradesh because there are no better job opportunities. the show streams on Amazon Prime video. The show got appreciate for its outstanding performance and mind-blowing direction. It got 8.7 out 10 ratings by IMDb.

Bandish Bandits is a musical drama.It revolves around a classical music student named Radhe and a pop sensation named Tamanna. They both set out on a journey to explore each other despite being opposite to figure out that opposites attract or not. The show is streaming on Amazon Prime video.

Manoj Bajpayee featured series The Family Man is one of the best Indian web series.The show is an Indian web series filled with drama and suspense. It tells the story of a middle-class man who works for a special cell of National Investigation. The show is streaming on Amazon Prime video. It is rated 8.6 stars out of 10 by IMDb.

Flames takes you to the flashback of your teenage life. This web series takes you back to the time when everything seemed to be innocent, the period of teenage romance. The story revolves around Rajat and Ishita, who fall for each other in the tuition class. The show is streaming free on MX Player.