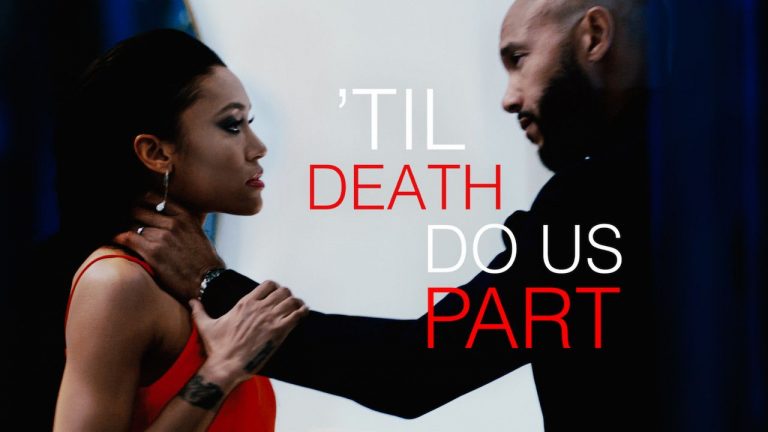 Til Death do us Part, 2017, is a movie directed and written by Christopher B. Stokes. It is an America based psychological thriller movie. This movie portrays a women who gets pregnant but her husband was not ready to start a family so he abuses her. The women struggles and tries to find a way to get away from him.

Til Death do us Part full movie is available on Netflix. This movie follows with a husband Michael Roland and wife Madison Roland celebrating their first wedding anniversary. They seem to be a happy couple. But as events follows, Madison asks Michael to have a baby but Michael refuses. That’s where the difference starts growing. Michael took birth control contraceptives so that he couldn’t make Madison pregnant. Madison finds out about it and make Michael confess. But Michael, instead, starts hitting her and abusing her. One day, out of anger, he rapes her. She became pregnant. The abuse continues for long when Madison’s friend Chelsea notices the bruises.

Later, Chelsea helps Madison to get out of Michael’s life. They plans a fake death of Madison. Everything goes according to plan and Madison starts living a normal life until one day Michael finds out about the lie.

Movies like “Til Death do us Part” are pretty engaging and interesting to watch. To know what happens next, do watch the full movie.

Till Death do us Part 2017 Cast includes:

This movie earned 35 Lakhs USD in the Box Office. Its screenplay is done by Marques Houston and it’s producers are Taye Diggs, Marques Houston, J-Boog, Shondrella Avery and Jerome Jones.

It’s a must watch movie if you love psycho and thrillers things. This movie not only is interesting but it also makes you curious about what is going to happen next. This is a perfect movie to watch on a weekend with some snacks on. It’ll leave you in awe and will be worth it.