The Sinner Season 1: Cast, Plot, Review and much more 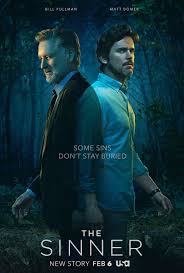 The Sinner Season 1 is an American anthology crime drama television series named after Petra Hammesfahr’s 1999 novel of same name. The First season of the series premiered on 2 August 2017 followed by a second season airing in 2018 and a third in 2020. The Sinner First season had a IMDB rating of 7.9/10 and received immense success and became one of the Highly rated television series.

Season 1 of the series won several hearts of Audience and impressed Viewers by its interesting and catchy plot.

Season 1 plot includes Detectives Harry Ambrose (Bill Pullman) and Dan Leroy (Dohn Norwood) Assigned a case which includes a young mother, Cora Tannetti (Jessica Biel) stabbing a man to death with no apparent motive and later not able to remember the reason for committing the crime.

However, Dan Leroy considers the case as open-and-shut due to several people witnessing the murder, Harry Ambrose is convinced there must be something more going on and decides to continue the investigation on his own.Harry’s investigation unfolds several secrets and leads to a real murderer.

One of the Prominent reason for the Groundbreaking success of the series is the outstanding performance of cast which really appreciated by Audience.

The first season of The Sinner received several nominations for awards like the Golden Globe Award for Best Miniseries. Even the lead actress Jessica Biel (Cora) won Television Film and Best Actress – Miniseries. Jessica was also nominated for a Primetime Emmy Award for Outstanding Lead Actress in a Limited Series.

According to the crime mystery series “The Sinner” Season 1 Story line, a woman named Cora Kills a man in front of several people. Now, one of the detective Harry Ambrose tries to find the reason behind the murder. As it is known to the detectives who Kills the men but the mystery is why she killed him. Hence, Harry solves several puzzles related to the life of Corra which emotionally connects Viewers with her.

The sinner is one of the groundbreaking shows but the Storyline is not something the audience hasn’t seen. Several other shows with the somewhat similar Storyline had already entertained audiences like Amazon’s Goliath but then also the sinner was very well performed and entertained the audience until the end. Moreover, the cast, Storyline, direction and the manner the story unfolds is really appreciable.

In conclusion, it is a very good Show with Great cast and direction and you should definitely go for it.

For more information related to these types of series stay tuned with Telly Gupshup.