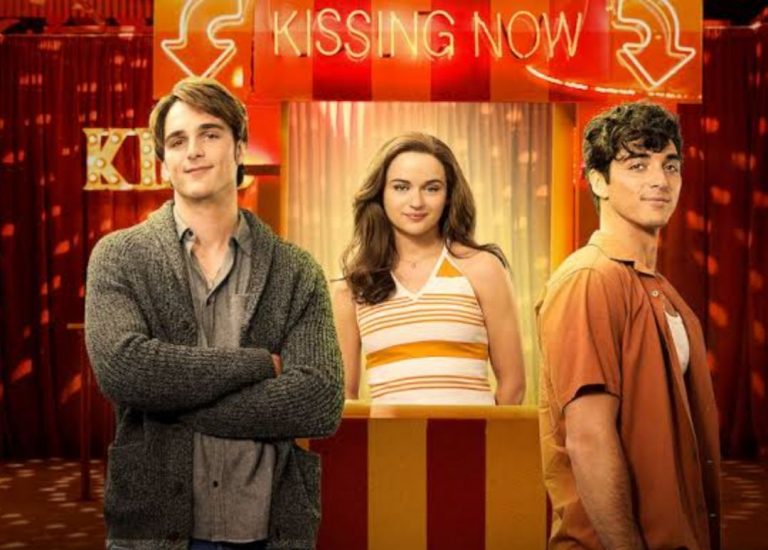 The kissing booth 2 was released on Netflix on July 24th 2020. It is an American teen romance comedy directed by Vince Marcello. Check out the trailer, plot, cast, deleted scenes, awards won and more!

The main plot begins when Ellie decides to reunite with her boyfriend in Harvard University but unfortunately doesn’t have enough money for admission to a private university. So she partners with her best friend, Lee, to take part in a dance competition, which if she wins will fetch her the prize money she needs for her admission.

However, Lee has a mishap on one of their training meetings (later uncovered to be fake) and suggests that Marco become her dance partner, which she isn’t too glad to even consider tolerating yet, ultimately does. As Marco and Elle begin spending more time together, they develop a close relationship.

Throughout the movie, Elle feels insecure about her boyfriend Noah’s new friend, Chloe and begins to doubt about Noah’s loyalty when she sees Chloe’s earrings on Noah’s bed. Trouble begins to stir in their relationship.

Lee’s relationship with his girlfriend, Rachel, is having problems, as Elle is going everywhere with them and not letting them have their time as a couple. After leaving Rachel waiting at the movies, she asks Lee to talk with Elle, promising he will but never does.

The Halloween Dance arrives, and Lee forgets to tell Rachel that they changed costumes (Rachel was a marshmallow while Lee and Elle were going to be crackers making a smore), upsetting her even more.

On the day of the competition Lee discovers Lee finds in his car trunk Elle’s applications to Harvard, which angers him as Elle didn’t tell him about it and they already had plans to go to the University of berkely together.

Elle and Marco win the competition and in the heat of the moment Elle kisses Marco not knowing that Noah was sitting in the audience which causes a drift in their relationship.

Later, during dinner, it was revealed that Chloe one night slept in Noah’s room when he was out and lost the earring, Elle was worried about.

The carnival day comes up, and both Lee and Rachel make up after being blindfolded and kissing each other at the kissing booth. Elle is additionally blindfolded and is drawn closer by Marco, who needs to talks with her about their emotions. Elle concedes to Marco there is an attraction between them however reveals to him she loves Noah and goes searching for him at the air terminal.

Chloe reveals to her that he went to search for her, and Elle discovers him in the park where they initially kissed. Noah admits to being humiliated that he wasn’t excelling at Harvard as he at first suspected. He additionally needs a relationship with Chloe similarly Elle has with Lee. Elle and Noah then make up.