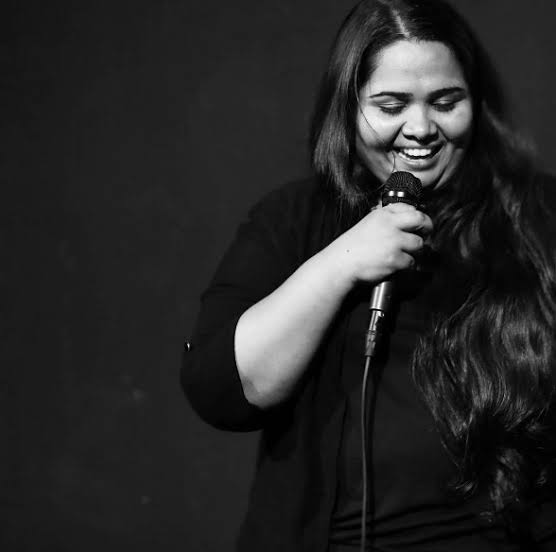 Sumukhi Suresh is an actress, comedian, writer and director from India, popularly known for her humorous sketches, which she writes and performs in live performances as well as on online platforms.

Sumukhi Suresh grew up in Nagpur. She did her graduation from M.O.P Vaishnav College for Women, Chennai. In 2009, Sumukhi moved to Bengaluru and started working at Hippocampus, a Children’s Library. Then she went on to work as a chef and was also employed at a food laboratory for a short period of time.

She then joined “The Improv,” an improvisational comedy program that took place in Bengaluru in 2013. With Improv, she has played over 100 performances in Bengaluru, Dubai, Mumbai, Hyderabad and Sweden.

Sumukhi’s first video was Anu Aunty- Engineering Anthem with Varun Agrawal, then made the Maid Sketch with Sanjay Manaktala as the rowdy Parvati Bai. Sumukhi rose to fame after playing the character of ‘Sumukhi Chawla‘, an employee of an NGO, in India’s first YouTube series mockumentary-style: Better Life Foundation, Sumukhi starred in comedy shows with Naveen Richard, the author of the Better Life Foundation program.

After receiving much recognition for her role in the Better Life Foundation, Sumukhi started a video series called Behti Naak on her own YouTube channel. In the video series she plays Behti Naak – a 10-year-old girl with a dead sense of humor. The videos went viral.

Sumukhi was approached by Amazon Prime, India to do a web series. ”Pushpavalli”, created by Sumukhi Suresh and was released on December 15 on Amazon Prime Video in India and received positive reviews. The show is directed by Debbie Rao and stars Naveen Richard, Manish Anand, Preetika Chawla and Shraddha. The show recieved great appreciations. Then she again did web show titled Don’t tell Amma for Amazon Prime which since its release has received positive reviews.

Sumukhi Suresh hosted the first season of Prime Video’s web series Comicstaan alongside comedian Abish Mathew in 2018. She was a part of the judges’ panel for the second season of the same show with Urooj Ashfaq replacing her as host.