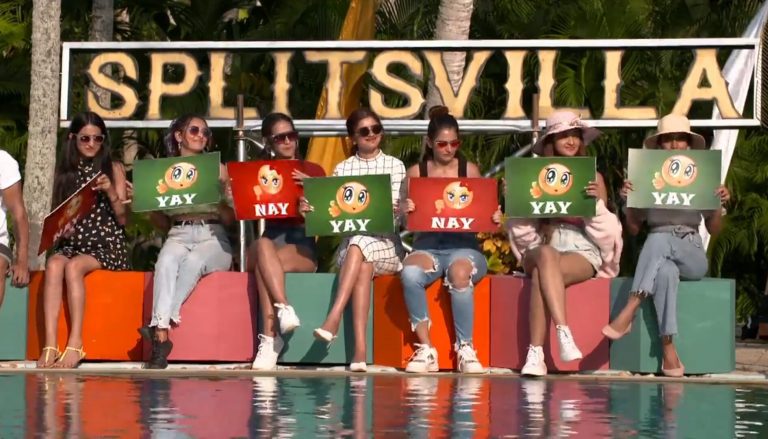 Splitsvilla 13 Episode 12 is out now. The previous episode was very interesting with Jay and Aditi being the second ideal match who went to oracle together after winning the previous challenge. The couple Janvi and Devashish got dumped in the previous dome session. As the result they both went to the wild villa. Now its time for another day another challenge.

The day started with boys receiving gift hamper from Denver. They all got ready and went to the challenge location. Boys were asked to made a pickup line for girls. Splitsvilla 13 Episode 12 silver connection challenge “Khoob Ya Doob.” The pickup lines are going to be displayed and girls have to give them yay or nay. They don’t know who wrote them and the boy with the most number of nay will loose and have to get the hit by the big sandal. In the first round, Samarthaya got the most number of nay and got kicked by Nikita.

Now, the second round was about party. And it was Samarthaya again who lost this time too. Nikita was very embarrassed about it. Riya kicked Samarthaya this time. Its time for the third round and its about business meeting. This time Vyomesh got all the yays. And the person who lost is Gary with all the nays. Avavantika volunteered to kick gary this time. The fourth round was about wedding. Trevon got all the yays in this round. It’s a tie between Vyomesh and Jay as they both got five nays. So they both have to dive this time.

It’s the last round or last situation which was public transport. Samarthaya got all the yays in this round with a perfect pick up line. This time three boys got five nays, so it’s a tie again. Shivam, Gary and Jay were the ones who got kicked this time. Sunny kicked Shivam this time, he was kind of happy for losing this round. And with that, “Khoob Ya Doob” challenge was over.

The Splitsvilla 13 Episode 12 challenge “Khoob Ya Doob” was won by two guys who got the most number of yays. Trevon was first and Vyomesh comes second. It was all a fun task and everybody enjoyed it and went back to villa with a smile on their face. Specially the golden villa people cause their group won the challenge. Riya and Sapna had a moment of heat in the end where Sapna kind of taunted Riya about Shivam. Sapna and Shivam had a fight when Sapna actually got upset.

In the end, the Splitsvillian received a scroll which had everyone in shock saying that today’s is their next dome session. The Splitsvilla 13 Episode 12 ended with the heat which got everyone nervous. Let’s see what happens next.