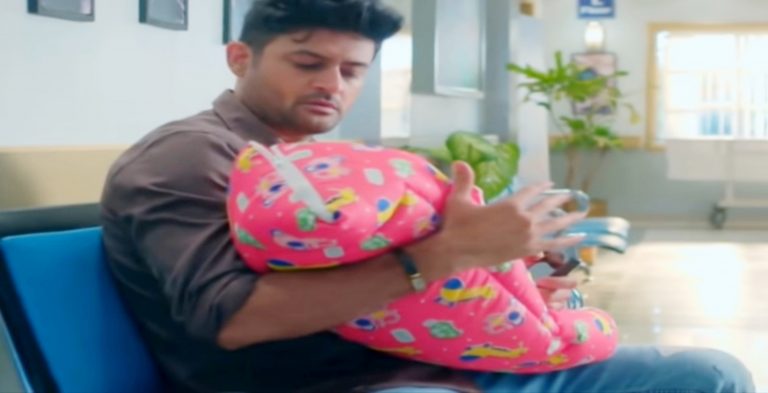 Famous daily soap on Star Plus Shaadi Mubarak is expecting a dramatic turn of events.

In an earlier episode of Star Plus drama Shaadi Mubarak, KT continues to look for Preeti and demands that her photographs be printed in every newspaper. When Kushala sees his condition, he becomes emotional and reminds him of his duties towards the new born babies. She gives the baby to him forcibly in order to distract his attention and then leaves, though KT’s heart flutters at the sight of his baby’s smile. He feeds the baby and promises that they will find her mother soon. He mutters, “Without Preeti, my family is incomplete.”

Shikha, on the other hand, experiences labour pains and eventually gives birth to a baby girl. Vishal beams with delight, and Shikha smiles as she sees him smiling. Preeti saves Shikha’s baby from falling and is called the baby’s godmother by Shikha. She entrusts Preeti with the care of her child, which she gladly accepts.

On the other hand, in drama Shaadi Mubarak, Tibrewals becomes distressed and attempts to comfort KT when he takes his baby home. He brings the baby into his room and explains it to her. He tells the baby about Preeti and reassures her that her mother will return soon.

Preeti, on the other hand, adores the boy, though Vishal says he hasn’t been able to learn much about Preeti’s family. He claims that the hospital’s records are also being burned, but Shikha insists that he keep Preeti with them. He protests their financial situation, but Shikha manages to persuade him. He notices a work opening in the newspaper and informs Shikha, who reminds him of his childhood dream of becoming a musician. She encourages him as they enjoy a peaceful moment together. Preeti beams when she sees their connection, and Shikha refers to her as “Mohi.”

As in the later Episodes of Shaadi Mubarak, Shikha will now fall down and be seriously injured, though Preeti cries when she sees her bleeding head. Shikha authorises her baby’s care for Preeti, asking her to love the child like a mother would. Preeti agrees to look after the baby while Vishal arrives and takes the baby away from Preeti. He forbids her from touching the infant, and Preeti sobs, saying she told Shikha that she will look after her child.

On the other hand, in drama Shaadi Mubarak, KT informs his family that Preeti is still alive and that they need not perform her last rituals. He stands firm in his declaration and expects that she will come soon.

What is written in Preeti and KT’s future will now be important for the viewers to see. What issues will KT and Preeti have to deal with? How will KT deal with his child? Is Shikha going to die? What will Preeti do to keep her word?

For answers of the following questions regarding shaadi Mubarak stay tuned with tellygupshup.