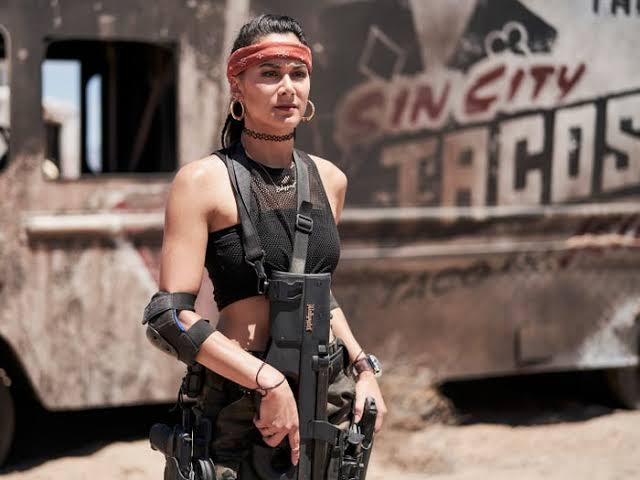 Samantha Win Tjhia was formerly known as Samantha Jo.She played a lead role in Army of the Dead which is a 2021 film.She is a 30 year old women.

She is an athlete and a good martial

artist.Her main occupation is acting. Her birthplace is Canada.She is 5 feet 3 inches with weight of 53kg.Her Qualifications is High School Graduate. She is known for Man of Steel (2013).

Her parents are Charles and Leslie Chabot Tjhia.She has two elder brothers, one of her brother named Andrew Tjhia.

She got married to Allen Jo(martial artist and actor) but they got divorced in 2019.As of now she is currently dating Shahaub Roudbari who is also a actor.

Her nickname is Sam.

She began learning martial art a her mother was black belt in jiu-jitsu. At age of twelve,she turned to wusher.She was trained under Alan Tang. Talking about her coach,she said, “My Wushu coach Alan Tang is just one of the best people in the world. Huge heart and so much to give..he’s my role model.”

From 2004 to 2008,she was a part of the Canadian National Wushu Team. In 2007 she won a bronze medal in Nangun at the World Wushu Championship in Beijing.

She made her film debut with the American British film ‘Man of Steel’ as ‘Carvex’. She appeared in American British films Wonder Women,Justice League and Zack Snyder’s Justice League. In 2021 she appeared in ‘Chamber’ in American film ‘Army of the Dead’ she played a lead or main role in that film. She has even worked in several short American films like Jia, Snow Stean Leon, Silent Night,Disobedience, Committed, and Unwelcome.

Her hobbies were candle making

She loves to practice marshal art in her free time

Her nationality is Canadian

Her Qualification is High School Graduation

Her net worth is USD $11 million approximately

Her favorite food is pizza

Hobbies are singing and acting as well

She has performed many stunts in Television and in films.In 2009 she made her debut as a stunt woman with Canadian television series ‘Aaron Stone’

After moving to LA she joined theater and made her stage debut as ‘Catherine’ in Thursday Night Theater Company’s production of Arthur Miller’s a view from Bridge in 2018.