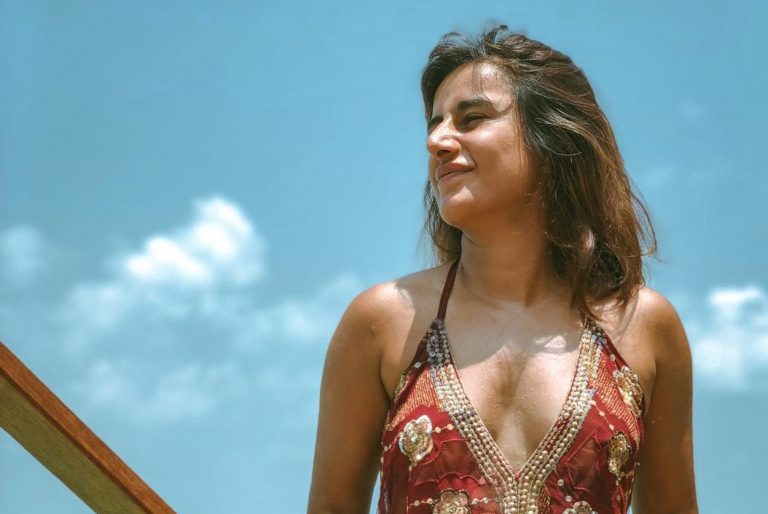 Saloni Chopra is an Indian actress and model. She is famous for her work in Bollywood movies. Saloni made her film debut with the short movie Maaya. She was also seen in Race 3 and Screwed Up (2018).

Saloni Chopra was born on 3rd August 1991 in Mumbai, India. She was born to Dia Chopra her mother in a Punjabi family Saloni completed her schooling from Australia. At the age of 18 Saloni moved with her family moved back to India. Saloni then Graduated in Fashion Designing from National Institute of Fashion Technology (NIFT). She follows Sikhism as her religion is Sikh.

Saloni was in relation with actor Satyajeet Dubey after a break- up from him, she was in a relationship with actor Zain Durrani. From 2017 to current She is dating Rahul Bhattacharya. He a Travel blogger, Businessman, and Lawyer.

She made her acting debut with the Short film “Maya” in 2013 as a lead role of Maya. The film received a positive response and appreciation and was also screened at the Cannes Film Festival. She made her small screen debut as an actor with the “MTV girls on Top” as Isha Jaisingh in 2016.

She appeared for the first time on the silver screen in the film “Race 3“. She runs two blogs on the medium by the name “Tiny Footprints” and “In Bed with Society”. In 2018 she was seen in the Tv Series “Screwed Up”. Saloni grew her interest in acting due to her mother as her mother used to work as a costume designer.

In 2018, Saloni appeared in cover page of the November edition Men Xp magazine with Kubbra Sait and Sana Mahapatra, for encouraging their stand on the MeToo movement in India.