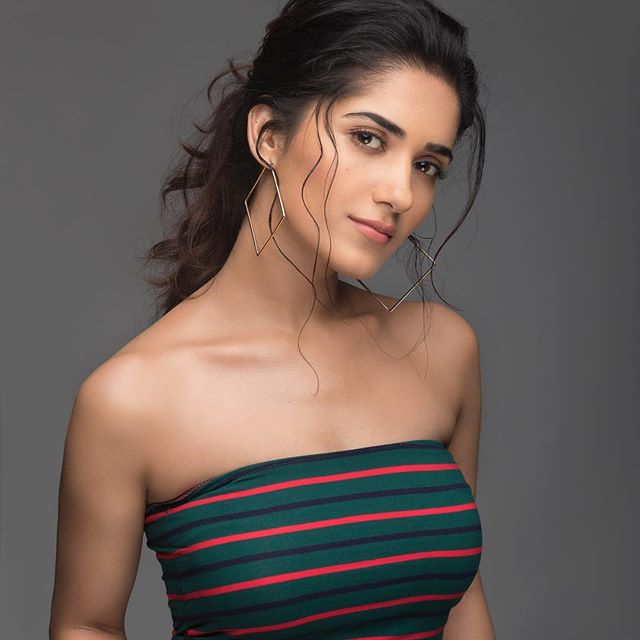 Ruhani Sharma is one of the youngest actress and model who mostly works in Telugu films. Her popularity went skyrocketing when she appeared in the famous music video album of the Punjabi song called “Kudi Tu Pataka.” Now let’s take a look at her personal life , education, career, net worth, family, relationships and much more.

She was born on 18 September 1994 in Solan, Himachal Pradesh, India. She is 26 years old as of 2020. Her zodiac sign is Virgo and she belongs to Indian nationality.

She has Graduated in Public Administration. However very less is known about her school and college.

Ruhani Sharma belongs to a Hindu, Brahmin family, Her father’s name is Subhash Sharma and her mother’s name is Praneshwari Sharma. She also has a sister Shubhi Sharma, and she is really attached to her maternal grandmother.

Ruhani Sharma debuted in a Punjabi music video, “Kadi tu Pataka” in 2013, and got really popular by her great skills. After this, She featured in a many of the popular Punjabi songs. Some of these are “Classroom” by Kulbir Jhinjer, “Date” by Ammy Virk, “Meri Jaan” by Pankaj Ahuja, and ” Bullet vs Chammak Challo” by Ammy Virk.

Later on In 2017 she appeared in a Tamil film “Kadaisi Bench Karthi” as Nithya, In 2018 she also showed up in a Telgu film “Chi la sow” as Anjali, and in 2019 she was the female lead of the Malayalam movie “Kamla”. This clearly shows the versatility and dynamic nature of Ruhani, that worked in number of different movies and made her name.

Other than the music video and the movies, she also did a number of advertisement films for some of the most well known brands such as GRT Jewellers, Close-Up toothpaste, Heinz Tomato Ketchup, Kalyan Jewellers, and Parachute Oil

According to Wikipedia, Forbes, IMDb and Various other Online resources, Ruhani Sharma’s net worth was near about $1-5 Million at the age of 24 years. She earned the money being a professional Model