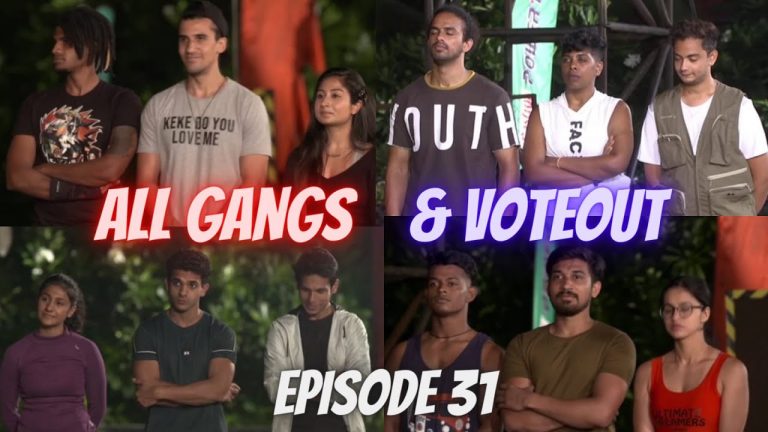 The next fresh episode begins with a new task and the roadies are asked to arrive at the new task location.

Boom! This is not just a task location, this is gonna be a thrilling and frightful vote-out, the two in one blended episode seems worth watching. “And this vote-out session is gonna be stressful for me and Michael,” says Hamid. Moreover, this session of Roadies Revolution is the stage where the final formation of gangs is going to take place. The formation will lead to appointing two more gang members in each gang.

Firstly, Neha will choose her captain today. Shreya comes forward and asks Neha to acknowledge her to be the captain of her gang and so does Poonam. Sanjay follows the pack and pitches as well. Rest of the others do not show their urges to be the leader of her gang to which Nikhil reacts and says, “I am surprised ki Baki log Kyun Nahi Banna Chahte Hain Neha Ke gang Ke captain, actually Kisi Bhi gang Ke captain Kyun Nahi Banna Chahte?” Abhimanyu was scared ki Kahin Neha Uska Naam Na lede because he has his heart out for Varun but the same shit happens with him what was destined to be and Abhimanyu does not seem to be very happy about this. But at the end of the day, he knows what he is assigned and is ready to move ahead strongly.

The chaos begins when Shreya says Nikhil does not believe in team effort and he is like what? She says he does not appreciate everybody’s effort and chooses one over the others and they are Michael and Arushi, to which Neha and Varun reacts heavily and enthusiastically and Shreya, conclusively suggest Poonam not to go for team Nikhil. Poonam goes for team Neha and Abhimanyu and Poonam forms the part of gang Neha. Varun goes for Nisha instead of Shreya and Nisha blissfully opts Varun and support Shreya’s statement of Nikhil being partial. Nikhil gets Shreya as his second gang member. Being left with no other choice, Michael seems not very content but somewhere he knows he has to make it work.

Dhamaka is when Rannvijay tells that eight members representing the particular gangs are going to be immune in this vote-out and rest namely Hamid, Zabi, Sanjay, Aman, and Vipin will be in the danger zone and one of them is surely gonna bid goodbye to his journey. Who’s journey will end will be decided by the vote-out session between these five. The highlighting part is the number of votes one shall be given the right to put will be directly proportional to the performance level of the contestant, better the performance, higher will be the number of votes he can give. The name of the task is “Win to Vote” and here begins the task.

The details of the task goes this way:

The second stage is to check the acceleration (collection of balls from the pack of halm and putting them into a platform in a row of three). The first one to complete will be given two number of votes, the second will give one vote, the third one will have no votes to give and the fourth one will be eliminated from performing the final stage of the task.

The last and final stage will check the power of the participant and only three out of five will be performing this stage. The final stage is hitting three targets while standing behind a wall. The first one to hit them all will be again given two votes, the second early performer will be given one vote and the third one will be given zero votes.

The final reckoning of votes will be the result for who’s gonna make it and who’s gonna book his flight back to his home.

Post Script: Hamid being injured, is given a chance to swap himself with someone he finds worthy to be performing well in the battleground in order to save himself from getting voted-out but the right to vote will not be conferred, it will remain in the hands of Hamid only. Michael comes forward to help him and play fair his part of the game. But Nikhil and Neha suggest him to take Jayant’s name. At the same time, Abhimanyu pitches as well with an intention to save his companions Zabi and Vipin. Hamid chooses Abhimanyu among the three.

The fact that Sanjay has been voted-out is crystal clear and his Roadies Revolution ends here only.

The other four who survived through this vote-out will now get their places in the choice of their gang they would make based on the level of their performance:

Hamid shows his willingness to be in Nikhil’s gang and now gang Nikhil is completed.

Aman spills out Neha’s gang to be in and Neha welcomes him home with a smile on her face.

Vipin shows his eager to be a part of gang Varun.

THE FINAL BLUE PRINT OF TEAMS:

It’s gonna be fun to watch Roadies Revolution when the teams are finally formed and there will be rough and tough championship battlegrounds wali feeling while watching the further episodes. Stay tight on your seats.