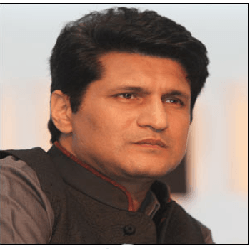 Rajeev Makhni is an Indian Technology journalist and Managing editor of NDTV. Apart from this he is also a Model and Businessman. He was born on 10 December 1969 at his hometown Amritsar, Punjab. His Zodiac sign is Sagittarius. He is also called The Tech Guru of India.

He did his schooling from Guru Harkrishan Public School, New Delhi and later went to “The Doon School” Dehradun, Uttarakhand. He completed his college degree from Monterrey Institute of Technology and Higher Education, Mexico. His educational qualification involves Master in Business Administration(MBA). His father belonged to Burma but later he got evicted from it during the conflict in 1949 and settled in Assam. Also, his grandparents had came from Pakistan during partition and then settled in Amritsar. His mother is from Amritsar only.

Rajeev started his career as a model and does the ramp walks and photoshoots for the famous brands in India. He also hosts the Tech Quiz Show ‘Croma Tech Grandmasters’ on NDTV Good Times. He is a multiple award winning personality who was awarded the Television Anchor of the year 2012 by Indian Television Academy whereas the Best Anchor on TV in 2013 as well. He also indulges in writing articles and blogs on technology or gadgets. He has written for various publications like Hindustan Times, M Magazines, Outlook, GQ, Men’s World, Travel and Leisure International, and T3, among others in India and abroad. In Hindustan Times his weekly column is the most read technology in the country. He hosts technology shows like “, ‘Cell Guru and ‘NewsNet 3.0’, which air on NDTV 24X7, NDTV Profit, and NDTV India.

He is also the founder and COO of “Imagine Clothing”. He also did Italian cuisine home delivery chain in Delhi, “Slice of Italy” at the age of 26. Technology is his passion and he likes to demystify technology and review the latest and best in technology. His interest involves Travelling and Driving High End Cars.