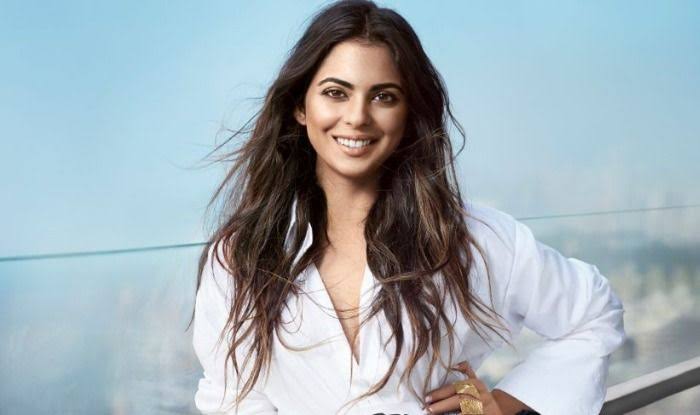 Isha Ambani is the daughter of business tycoon Mukesh Ambani and granddaughter of the legandary Dhirubhai Ambani, and Director of Reliance Jio Infocom and Reliance Retail. She has acquired business and psychology degrees from abroad.

Isha was born in 1991 in a Vaishya family in Mumbai, Maharashtra. Her family is one of the richest families in the world and is known for their lavish lifestyle.

Isha Ambani is a beautiful young woman with a good physique. She has acquired her mother’s facial features.

Isha was born to her parents Nita Ambani, Chairperson and Founder at Reliance Foundation and Mukesh Ambani, Chairman and Managing Director at Reliance Industries Limited, on October 23, 1991 in Mumbai, Maharashtra. She took birth in the richest family of India. She has a twin brother, Akash Ambani, a business executive and a younger brother, Anant Ambani.

Isha was married to Anand Piramal, Executive Director of Piramal Group, on 12 December, 2018 at Antilla (Ambani house), Mumbai, India. Their wedding a very lavish Indian affair. It is considered to be one of the most expensive weddings in the world, costing around US$100 million.

Isha completed her schooling from Dhirubhai Ambani International School, Mumbai and went to Yale University, Conneticut, USA to aquire a degree in Psychology and South Asian studies. She played the the University Soccer Team. She also did an MBA from Stanford Graduate School of Business, California, USA.

Before indulging herself in Reliance, Isha wanted to become a teacher. In 2008, when she just about 17 year old, Isha was listed as 2nd in the list of Youngest Billionaire Heiresses in Forbes, with a net worth of $70 million. She worked at McKinsey and Company (a management consulting firm) in New York, in 2014. In October 2014, she was inducted into the board of directors of Reliance Retail and Jio. She was listed among twelve most powerful upcoming businesswomen in Asia, in 2015. She did a photoshoot for Femina Cover (2015). She led the launch of Jio’s 4G services (2015). Jio was her first major project in RIL. She oversaw the launch of AJIO (2016). Isha is the major person behind Reliance Foundation’s digital education program that provides resources to teachers in rural India.

Isha’s net worth is estimated around $100 million.