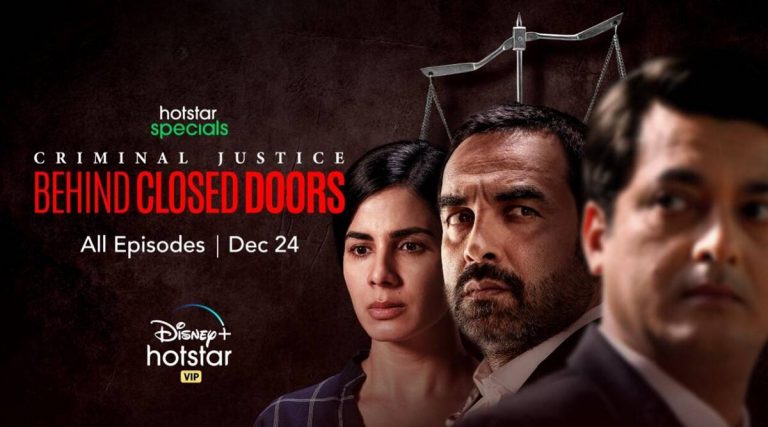 Released on Hotstar’s new label Hotstar Special on April 5, 2019, crime thriller Criminal Justice is an Indian television web drama based on the American Crime Drama made in the year 2008 with the same title written by the Peter Moffat. Written by Shridhar Raghavan and directed by Tigmanshu Dhulia and Vishal Furia, the series rated 8.1 out of 10 by IMDb.

The Hindi language 10-episode-series follows a courtroom drama involving a young fellow named Aditya, the role portrayed by Vikrant Massey, who falls into a false trap of a crime while performing his job. A one-night engagement with a stranger named Sanaya (the role portrayed by Madhurima Roy) turns into a terrifying incident that is completely unbelievable to him. The night passes and the next day, when he wakes up, he comes across an absolute horrific morning with blood around him everywhere. The murderer of the girl is yet to be revealed. Who is the culprit? Is it Aditya or is mistakenly happens to be the murderer? These are some of the questions followed by their answers as the show goes on.

The depiction of the storyline carried by trailer goes this way, “A one night stand turns into a nightmare for Aditya when he wakes up with blood on his hands.”

The follow-up season of the series is in the talks and the makers have announced the official release date and the series is going to touch the floors on December 24, 2020.

Pankaj Tripathi can be seen to be coming back as the advocate Madhav Mishra to the next one as well. The new cast comprises of Anupriya Goenka, Mita Vashisht, Deepti Naval, Ashish Vidyarthi, Jisshu Sengupta, Kirti Kulhari, and Shilpa Shukla.

Pankaj Tripathi will be seen fighting another crime thriller case involving the murder of a man, husband to Anuradha Chandra where his wife is accused of his murder. The investigation will result in revealing the real culprit and saving Anuradha from being known for the murder charges.