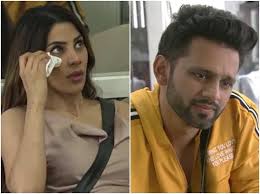 Chaos erupted in the Bigg Boss house when a harmless cupid game became the source of a fight.In the last episode, we saw the contestants playing a cupid task followed by romantic date of Rubina Dilaik and Abhinav Shukla. We witnessed housemates sacrificing each other’s stuff to fulfil their wish in Bigg Boss house.

However, a fight erupted when Rahul Vaidya refused to tear Disha Parmar‘s scarf for Nikki Tamboli, as a part of the task and so called him a selfish person.

It is yet to be seen, if Rahul Vaidya will tear Disha Parmar’s scarf.

Earlier in the show, Disha asked Rahul to propose to her, which he did. But before agreeing to his proposal, she placed two conditions. She said, ‘Mujhe chahiye badi shaadi and usse bhi bada diamond (I want a big wedding and a bigger diamond).’ Rahul happily agreed to her demands.

Other contestants playing the game included Rakhi Sawant who accepts the Bigg Boss’ task and tore husband Ritesh’s letter and sat on Nikki’s seat and Aly Goni who was given the task by Bigg Boss to sign a document, in which there is a statement, that he will give up the Bigg Boss winner’s trophy to which, we see the Yeh Hai Mohabbatein actor refusing it and leaving the chair.