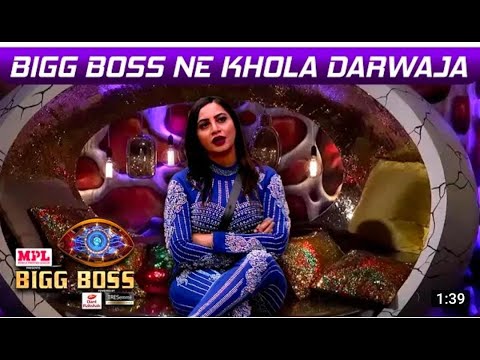 A new promo popped the eyeballs of views out . It all commenced with Salman scolding Arshi for bullying Vikas Gupta and talking ill about his mother. The promo seems to suggest the fact that Arshi Khan is all set to exit BB house.


In the clip, show host Salman Khan is seen elaborately reprimanding Arshi over certain incidents in the house over the week, Salman touched the issue indirectly claiming Arshi’s fault,following which she gets up and announces that she is “leaving this show”.

Earlier this week, Arshi had an execrable fight with Vikas, which was irksome . The fight intensified so much that at one point Vikas reverted by pushing Arshi into the swimming pool. He was evicted from the show in correspondence to physical onslaught.
In the Weekend Ka Vaar episode, Salman will be seen pounting out at Arshi over the incident, and supporting Vikas, firmly stnding in his favour.

In the promo of the episode, Salman is seen saying: “Arshi Vikas ke maa par gayi. Agar meri maa pe koi jata to main bhi shayad wahi karta (Arshi spoke about Vikas Gupta’s mother. If someone spoke against my mother, maybe I would have behaved likewise).” “You cannot do this,” Salman asserted, following which Arshi tried to explain her side of the story by saying that she did not use any “wrong words” for Vikas’s mother.
“Maine kisi galat alfaz ka istemaal nahi kiya (I did not use any wrong words),” Arshi said.
Salman stood bt the side of Vikas and said: “Agar koi mere ma-baap ke baare mein bolta, shayad main bhi waise hi behave karta (if someone spoke about my parents this way, I would have possibly responded in a similar fashion).” In the clip, fellow housemate Rubina Dilaik is seen complaining to Salman about the way Arshi talks to her husband Abhinav Shukla.
Reacting to it, Arshi said: “Chup rehna Rubina Dilaik (shut up Rubina Dilaik).” As she was yelling, Salman asked Arshi not to misbehave on the show.

“Yeh badtameezi se baat karein na. Humare show mein na karein. Aap koi doosra show dhundh lein (Do not talk like this on our show. You may choose some other show),” Salman said.
Salman then said that the doors are open, and she can walk out if she does not want to mend her ways.

In the clip, Arshi is seen getting up and saying, “I am leaving this show”. It is not clear if she stays in the show or quits.

It will be interesting to note whether Arshi will Exit or not. Do share your views.