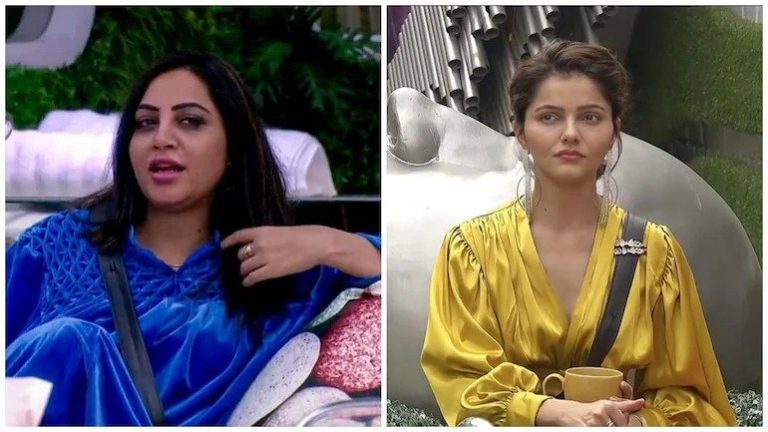 In the recent episode of Bigg Boss 14, viewers witnessed how Arshi Khan was targeted by all the contestants. The main lime light of the episode was Arshi’s fights with the housemates despite the fact that Rahul Vaidya made an entry in the house and of course the nomination task. It seems like Arshi is currently on the throne of fighting. Since the arrival of the Sun, she started getting into squabbles with Aly Goni, Rahul Mahajan, Manu, Nikki Tamboli and Rakhi Sawant.
Furthermore a perpetual fight continued between Kashmera Shah and Nikki till the end of the episode. They were actually sorting things out between themselves when Kashmera got angry over Nikki’s allegation that she is incompetent. Their fight, also about referring to each other’s age on the show, continued throughout the episode.

Then approached the most awaited moment, the announcement of the nomination task. The contestants were supposed to put a ‘REJECT’ stamp on the cheek of the contestants they desired to nominate.Rubina nominated Arshi and Eijaz .On the other hand Nikki picked Kashmera and Arshi. Rahul Mahajan spelled turmoil the names of Arshi and Rubina, Rakhi Sawant nominated Arshi and Manu, Eijaz picked Jasmin and Abhinav and Arshi selected Rahul Mahajan and Manu.
Conclusively, Bigg Boss announced that Arshi, Eijaz, Monu, Abhinav and Kashmera are nominated for the elimination round of this week.

The show Took steep curve starting when Arshi picked up a fight with Rubina Dilaik and Abhinav teasing Jasmin about Aly Goni. To add flavour to the drama before the finale, Aly entered the house all over again . Rubina mimicked Jasmin’s confession about her love for Aly, after which all of them busted into laughter with their hearts out.In the garden area, Arshi picked fights with Rahul Mahajan and Rakhi Sawant in the morning. When Rahul tried to discuss his differences with Arshi in front of Eijaz and Manu, Eijaz left the room, stating he doesn’t want to be a part of such conversations.

It will be interesting to see what course the show will take up now.Stay tuned for more updates.