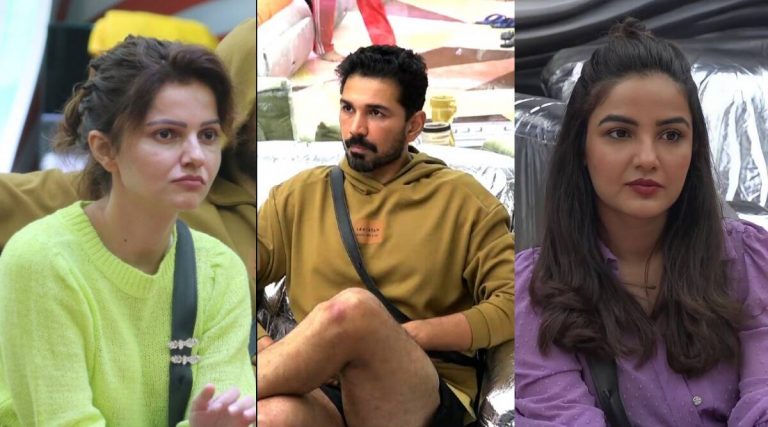 The Bigg Boss House is currently preoccupied with the Panchayat task, let us talk about the insight the promo has given us.

The BB House has been divided into two because of the Panchayat task and it seems the formers friends Rubina and Jasmin are butting heads. The kitchen area is the territory of Team Jasmin and the bedroom area is under Team Rubina. These divisions have created more drama in the house.

Nikki Tamboli faked having a fever so that Rubina and Abhinav let her get inside the bedroom. Nikki took advantage of this situation and rushed to gather her personal items like cosmetics and make up brushes. This did not sit well with Rubina and her team, they demanded that she leave the bedroom area ASAP and leave behind the things she was trying to sneak out from there.

Later when Nikki tried to get out of the bedroom, she was being cornered by Rubina and Abhinav who were telling her to return the stuff she took from the bedroom and only then can she exit. This situation made Jasmin Bhasin very angry who yelled at Rubina and told her to be considerate and humane towards Nikki and claimed that she did not tell Nikki to steal the brushes.

But another clip clearly showed Nikki, Aly and Jasmin sitting around and conspiring about how to get past the other team and enter the bedroom. So, this just goes to show that Jasmin was well aware of Nikki’s plans and decided to lie to Abhinav about her innocence. Aly Goni too was involved, he was the one giving ideas and strategizing.

The positive and bubbly image that Jasmin had is slowly being replaced by a more strategic and tactful one. Even the viewers are catching on to this.  Jasmin and Rubina’s fans too seem to be clashing time and again. What do you think of this situation? Please do let us know down below in the comments.