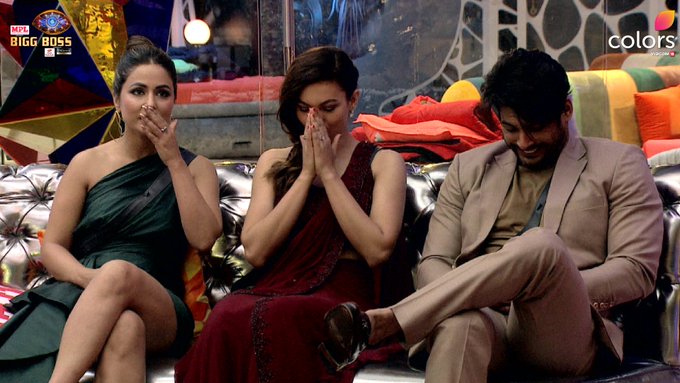 One after the other, the numerous twists in the Bigg Boss game hints that the battle will only get more intense and tougher from here on. 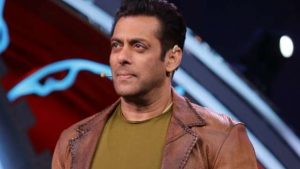 The Sombaar Ka Vaar begins with Salman Khan taking the stage and greeting welcoming the viewers to Bigg Boss 14 Weekend Ka Vaar. He reminds about the twist of giving freshers the power to eliminate one from the bottom three – Shehzad Deol, Jaan Sanu, and Abhinav Shukla. Salman reveals that after the revelation, the atmosphere in the BB 14 house heated up. 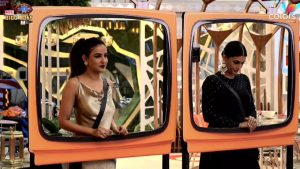 Salman then asks gives a task to the seniors, wherein they have to choose one fresher from a pair, who they want to see ahead in the BB 14 game. The first pair to come up is Eijaz and Rubina. Sidharth picks Eijaz for being entertaining and tags Rubina selectively dumb.
However, Hina differs from Sid’s views and says that Rubina is more entertaining that Eijaz. Gauahar seconds Hina’s views and chooses Rubina.
Next up are Pavitra and Jasmin, and Salman asks the seniors to have ‘aapsi sehmati.’ Hina and Sidharth pick Pavitra, while Gauahar chooses Jasmin, but later changes her decisions.
Later, Jaan and Nishant stand each other. Sidharth picks Jaan. Gauahar disagrees with Sidharth but later chooses Jaan. Hina seconds Gauahar’s decision and picks Jaan.
Abhinav vs Rahul, Gauahar chooses Rahul, while Hina goes with Abhinav and Sidharth agrees with Hina’s choice. However, Gauahar disapproves of Hina, and Sid’s decision, but gives in to their call for ‘aapsi sehamati.’ 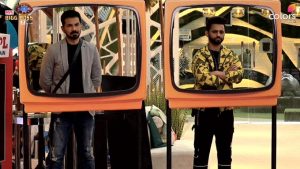 According to the seniors, they want to see Rubina, Abhinav, Jaan, and Pavitra in the BB 14 game ahead.
New task 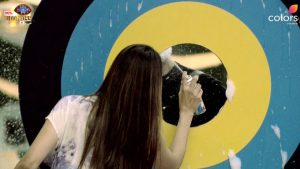 Salman says to the inmates that the next 48 hours more crucial for this show now. He tells Rahul and Nishant to bring some items from the storeroom. They bring a board to the living room. Salman says you should know by now to have no mercy on your competitors. You all have to tell who you don’t see in the ‘confirmed’ list at all. 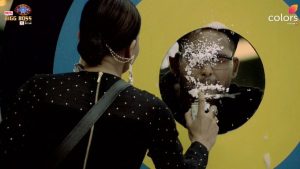 You will take a name and they will stand on the target board, you will apply the foam on their faces. Salman says since Shahzad is not visible, nobody can take his name.

Shezad ‘gayab’ contestant of the house 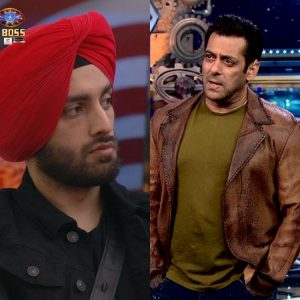 Salman says Shahzad has 5 votes so he has to leave now. I am sorry brother but you are not going home today. Shahzad says what’s my status? Salman says till the next order you will be invisible in the house. Rahul brings the clothes for him. Salman says Shahzad will work in the house but he won’t have a say in the decisions of the house. You are a ‘100% not confirmed’ contestant now.
Salman shares that seniors will play a huge role in the same, as it is about being confirmed or getting their game over. Salman then asks the freshers to choose one senior, and decide in whose team they want to be – Hina, Sidharth, or Gauahar, as ‘ab scene paltega.’
Eijaz, Nikki, and Pavitra decide to be on Sidharth’s team, while Gauahar’s team as Rahul and Jaan. Hina’s team consists of Nishant, Abhinav, Rubina, and Jasmin. Later, Gauahar and Jaan are seen talking about the game. On the other hand, Sidharth is also seen strategizing with Nikki, Pavitra, and Eijaz. Hina suggests Rubina and Abhinav be careful in choosing their problems in the house. 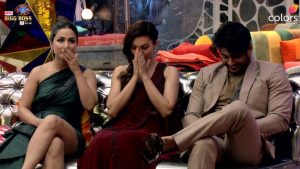