BIGG BOSS 14: Social Media outrage over Eijaz asking Jaan to put his hand in the toilet in the name of a task 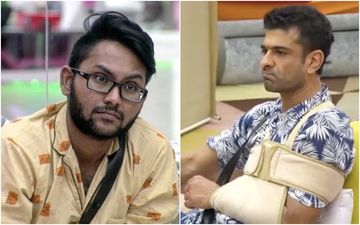 There is once again a social media outrage about Bigg Boss, this time against Eijaz Khan. People are not happy with the latest promo of Bigg Boss where Eijaz puts Jaan in a tough spot in the name of a task.

We saw a glimpse of the angel and devil task. With Eijaz, Nikki, Aly as devils and Rubina, Pavitra, Abhinav, Jaan as angels. Here the devils are seen ordering the angels around and refusal to do a task means quitting and losing. This task is for the luxury budget.

But people are angry about something that happened with Eijaz Khan. the fans are not happy that Eijaz is playing this task dirty, quite literally. In the promo he is seen asking Jaan to stick his hand down the toilet bowl.

In all the years of Bigg Boss we have witnessed a lot of weird things and challenging tasks in the House but people are questioning if this task was pushing the limits. Tasks, in the past have included contestants eating something super spicy or oil being poured over them but asking someone to put their hand into the toilet seems like going too far.

People are blaming Eijaz for bringing down the level of Bigg Boss and making it downright gross. Not only did he tell Jaan to put his hand in the toilet but he also told him to lick his wet hand which sounds beyond disgusting.

Often, we see that Bigg Boss promos are edited in such a way that it portrays someone in a bad light but that’s isn’t the case this time as we see Eijaz actually make these demands. But to confirm if this promo was showing the whole truth we have to wait for the episode.

This incident has put Khan in the fans’ bad books for sure. End of the day fans are the deciding factor on who gets to stay and who leaves. So hopefully Eijaz realises that his task raised a lot of questions and disapproval overall.

What are your thoughts on this incident? Do you think Eijaz crossed his limits by putting Jaan in such an uncomfortable position?