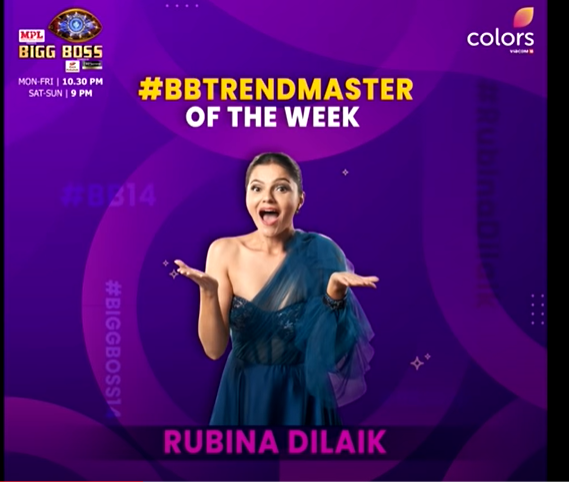 Bigg Boss has declared Rubina Dilaik as their Trend Master of the week following a great performance in the recent episode. We witnessed a great gameplay by her and even greater display of friendship.

Rubina showed us that she can shine while doing a task and be a great friend to her fellow housemates when time comes. Fans have observed her actions and concluded that her alliances are actually meaningful friendships, she has proved that her bond with the others is real and not just a facade for the sake of selfish competition. In the recent BB episode, she shined through.

This whole week has been great for Rubina, in the beginning of the week with the Angel and Demon task she performed very well and stood out. And now it seems even Bigg Boss agrees that Rubina Dilaik is worthy of the title Trend Master of the week. The competition was between Rubina, Jasmin and Rahul but Rubina took home the title due to her remarkable performance this week.

This title was previously held by Nikki Tamboli but she has hit a dead end in the house, it seems like she has been repeating herself and her performance has become stagnant. But now due to Rubina’s strong stand on issues, her chemistry with Abhinav, her performance and her friendships have made her a strong contender. We see her actions setting trends in the house.

Rubina has also displayed a lot of strength and leadership as well so this title was well deserved. She has proved herself to be a very strong contestant and even the fans think if she keeps on going with the same attitude and charisma then there is no stopping her from winning the whole show itself!