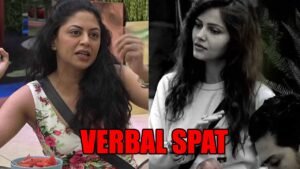 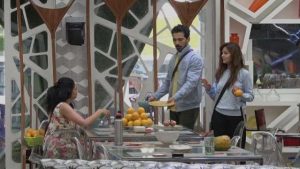 Rubi refuses to cut fruits for Kavita. Kavita says she being a captain can’t do work and all are taking care of her. Rubi defends herself when Kavita compares her with Nikki. She says to her that she is not here to cut fruits for her.Kavita tells Rubina that she is behaving like Nikki, and dragging issues. 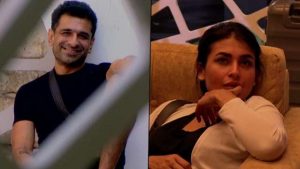 Nikki reveals to Eijaz that Pavitra likes her and is emotionally attached to him. Nikki suggests him to clear it with Pavitra, as Eijaz says that he does not have ‘any feelings’ for her. Next, Pavitra cooks a heart-shaped roti or paratha for Eijaz for breakfast. Nikki and Jaan tease Eijaz, leaving him blushing.
Bag task continues 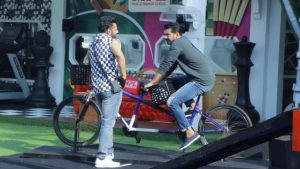 Nikki, Pavitra and Jaan discuss whose bag they are taking. Jaan says he will of Eijaz. Nikki says she will not.Rahul asks Jaan to clear whose bag he will fetch. Jaan gets confused whether to fetch Eijaz’s bag or not. Buzzer ring and task starts. Rahul tries to snatch Kavita’s bag. Kavita defends him. 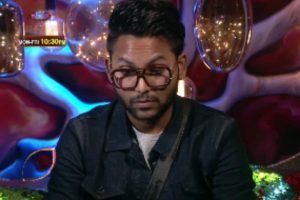 The channel and production house wrote a mail to the Chief Minister of Maharashtra. The letter said, “We hereby apologise if we have inadvertently hurt the feelings of the people of Maharashtra due to the broadcast of the said comment in relation to Marathi language. We value the audience and the patronage of the Marathi speaking audience and respect all languages of India in the same manner. 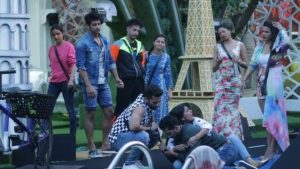 The round begins with Abhinav, Shardul, and Eijaz fighting for the captaincy at last. Since Rahul, Pavitra, Jaan, and Nikki decide to support Eijaz; Pavitra, and Rahul ‘attack’ Abhinav. They get into an aggressive tiff as they try to snatch his bag. Naina and Rubina call out Rahul and Pavitra’s violent actions. The episode ends with their battle.