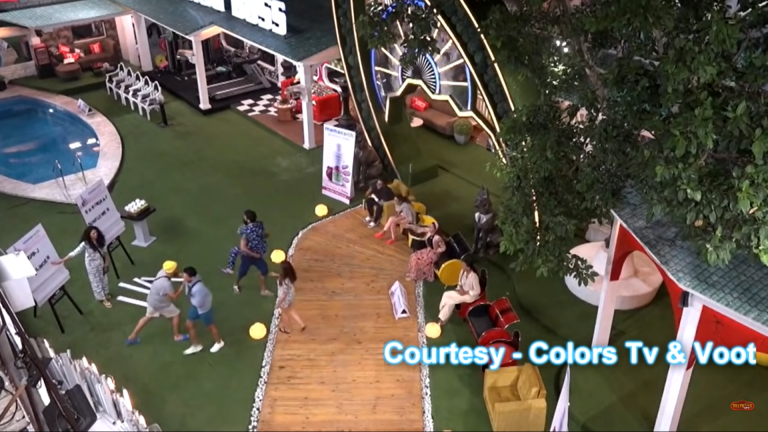 The Bigg Boss live streamed showed the house mates busy with a task very late at night and everyone is curious to know what it is.

After the captaincy task got over which was between Jasmin Bhasin, Aly Goni, Eijaz Khan and Kavita Kaushik. The rumour had it that Kavita Kaushik had gained the position of the new house captain. In the live feed we saw that both Jasmin and Kavita were exhausted after the task and rushed inside to get cleaned up and eat. Jasmin had eaten and gotten refreshed while Kavita was still searching for food. Kavita probably took longer because of the task she had gotten pretty dirty with the oil and powder and likely went to get cleaned up.

But the live stream showed a task at night, it started quite late. It seemed like a promotional task where the housemates were required to participate in various activities. One of the activities seemed like some sort of a game where they had to shuffle letters and names.

Another very fascinating sight was that all the guys seemed to be giving all the girls a head massage, it’s still not clear if it was a part of the task or the guys out of their own goodness volunteered to do this. People are still speculating that this might be a part of the task or some sort of punishment. Or maybe there is just a lot of love and harmony in the Bigg Boss house right now.

Fans are also wondering that why would they be doing champi in the middle of the night and everyone is very eager to know the reason behind this live feed. I guess we will have to stay tuned to find out more about this curious task. What are your thoughts on this, any guesses behind what was actually going on?