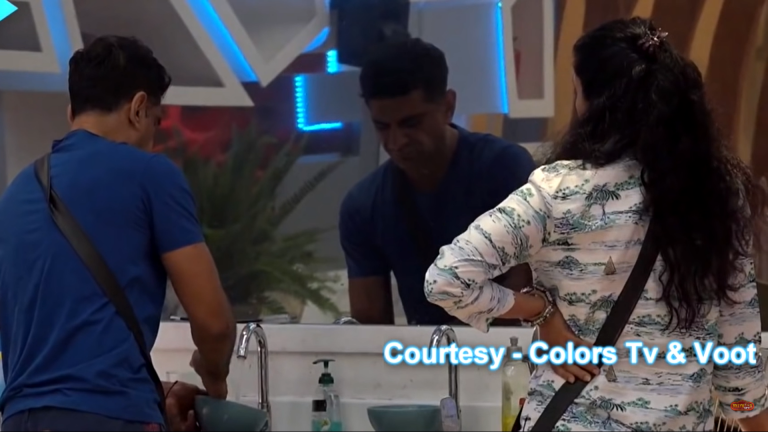 In the Bigg Boss house the dynamics between people keep on changing, one moment they are best of friends and the next they are out right fighting. The opposite seems to have happed with Kavita Kaushik and Eijaz Khan, the two seem to be speaking again.

Kavita and Eijaz have had a very tension filled equation since the show began. It all started with Kavita accusing of Eijaz of portraying them as friends just for clout and she thought he wanted to leech off of her fame. Their relationship had a very rocky start but it seems that things might be turning around for the better.

On the live Bigg Boss feed we saw that after the captaincy task the two estranged friends were talking to each other in the kitchen. It truly was a surprising sight, they were very civil and understanding throughout the conversation.

It seemed that they were talking about Pavitra Punia. Kavita was apparently trying to patiently explaining Eijaz that Pavitra and he should sit down and have a conversation. Kavita thinks that the two understand each other. Both of them sympathise with each other and know why they are angry, Kavita thinks they should make up.

Kavita was trying to convince Eijaz that he should approach her and have a productive conversation with her. But Eijaz responded saying that he didn’t come to the show to make friends or to break friendships. He said he would talk to Pavitra but he would not go the extra mile as he was here for the show not to make friends.

The focus of this story isn’t Pavitra Punia but rather that Kavita and Eijaz seem to have made up. The two seemed to be speaking to each other openly and candidly. Have they patched things up and put all the water under the bridge and forgiven each other? I guess we will have to stay tuned to see where these two are headed.