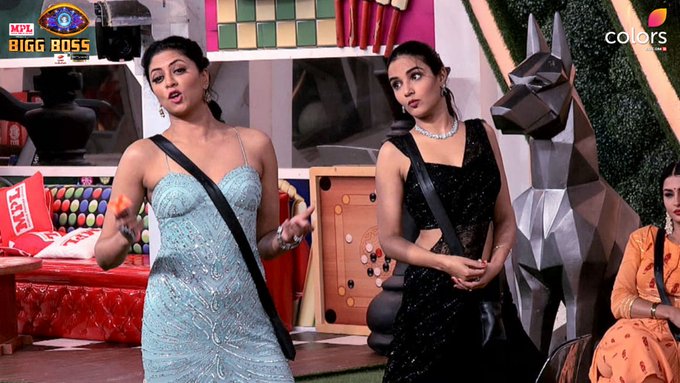 Contestants Fighting for Themselves

Ekta coming asking contestants who, according to them, won’t reach the upcoming weeks. Rubina replies that according to her Pavitra and Nikki won’t survive until week 13since their truth came out. Contestants feel that Jaan and Kavita will survive only till Week 7, while they feel Nikki and Pavitra. Abhinav and Rahul will get eliminated in Week 13, paving the way for Eijaz, Jasmin, Rubina, and Aly to enter the final week. Salman Khan enters the stage and greets everyone.

Ekta reveals that she has tested contestants on three qualities – ‘bebaaki, dabangg and junoon.’ Ekta says that she is known to change actors but keep the characters so today’s challenge is that the contestants will play each other’s role. Salman asks Rahul to get something from the storeroom. Once he is back, Ekta remembers the big fight between Eijaz and Kavita. She asks Aly to play Kavita and Rahul to play Eijaz and recreate the fight. Aly and Rahul do that in an hilarious manner.

” Ekta then asks Kavita to play Eijaz and Rubina to play Pavitra as they play out the nominations scene, where Eijaz sacrificed his personal item for her. Salman and housemates are left in splits, and he calls Rubina ‘outstanding.’ Ekta then requests Salman to imitate Pavitra.

Next up, Ekta wishes to recreate Jasmin’s outburst after her fight with Rahul. Nikki plays Jasmin, Eijaz gets into Abhinav’s role, while Pavitra disguises himself as Rubina. The trio hilariously performs the scene. Nikki’s overdramatic performance leaves Ekta impressed, and she feels Nikki could be a Naagin.

Ekta announces the immunity task: she has shortlisted two contestants whom she will talk personally and the one who will win her heart will get the immunity stone. The contestants are Rubina and Nikki.Ekta enters the Big boss house and meets Rubina personally first. She says that she is public’s and her favourite and then says that some opinions of hers try to fit into Abhinav’s ones but, while his equations with housemates are clear while hers sometimes get confused. Rubina replies that sometimes situation gets tricky for her and she listens to Abhinav not to disrespect him since, whatever he says is for her well-being, therefore she doesn’t follow her instinct. However, she promises that she will follow her instinct now onwards after Ekta says that Abhinav would be the happiest if she does that. Ekta also reveals that Rubina is her favourite.

Ekta meets Nikki to whom she says that she is playing the best game but points out that she rises issues that she leaves in the middle. Nikki answers that in the first weeks she didn’t know people while now she has given tag of friends with whom she has spent time so she needs to think before arguing and dragging the argument to something big. She says that now she has understood that there is no friend in this house and people just want to pull her back. She takes Aly’s name who is apparently using her to make his game strong. Ekta suggests her to know the animal she is and feed it, the game is hers, the victory is hers so she must play by her heart and mind.

Salman Khan returns to the contestants and reveals that Rubina is safe and announces that Jaan is getting eliminated. Jaan sings the beginning of “Channa mereya”. Salman Khan leaves. Jaan bids adieu to everyone. He hugs Eijaz too. They cry. Eijaz promises to come to meet him. Nikki cries her heart out while hugging Jaan. The latter asks Eijaz to take care of his health and says that he sees him in finals. Rubina promises him that they will come to his live concerts. Jaan leaves the house.