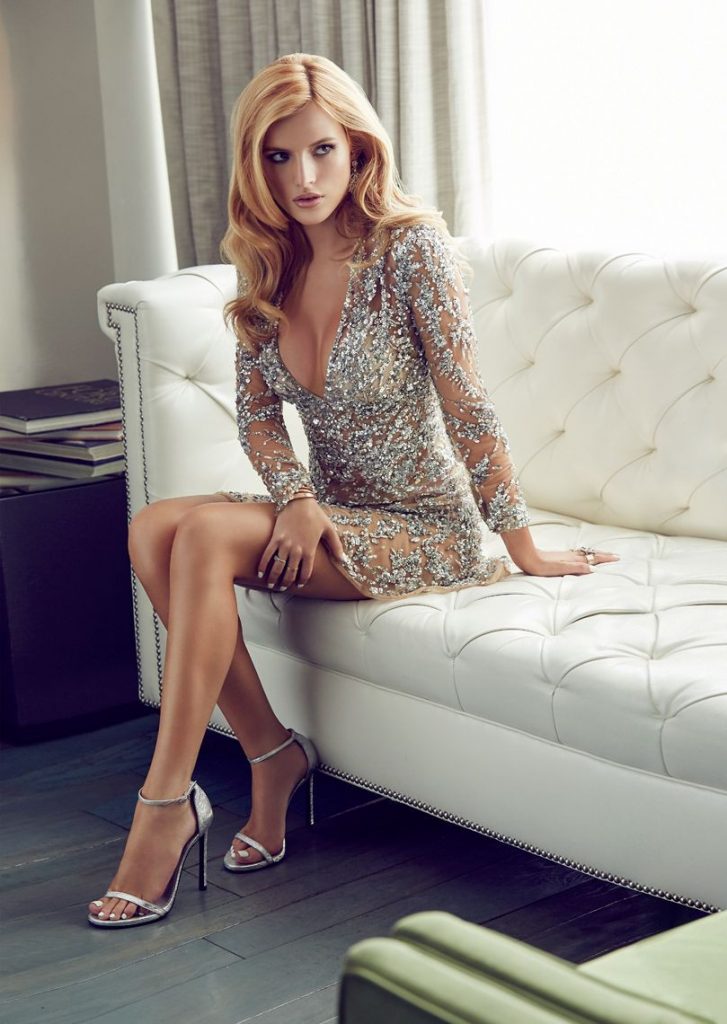 She received many awards like An Imagen Award, a Shorty Award, a Teen Choice Awards and a Young Artist Award.

She has Italian, English, German and Irish ancestry. Her father is of urban descent and he died in an traffic accident in April 2007.

She started working as child artist to support and her family. As she was dyslexic, many people used to bully her . When she was in first grade , she was diagnosed with Dyslexia. At the age of 14 ,she was sexually abused which she revealed in January,2018.

In 2017, she dated Emo rapper Lil Peep for a short period. In 2019, she was in relationship with Italian Singer Benjamin Mascolo.

They both announced their engagement in March,2021.

In 2003, Thorne’s First film appearance in film ‘Stuck on you’,But it was an uncredited role as fans . In 2007,She joined recurring cast of Dirty Sexy Money’s second season which was her first major television role.

In 2008 , she stared with Christian Slater and Taylor Lautner drama series in – My Own Worst Enemy and won a Young Artist Award for her character Ruthy Sivey.In the same year, she starred in an episode of October Road as Angela Ferilli.

in 2009, she was stared in a web series ‘Little Monk”. She also appeared in a horror film Forget Me Not  as  an vengeful antagonist.

Disney Channel announced to increase the second season of ‘Shake It Up’ to 20 episodes.

Third season of ‘Shake it Up’ Announced by Disney Channel.In the Disney Channel original movie ‘Frenemies’ She casted as Avalon Greene.

On March 30th, 2013 Hollywood records confirmed via Twitter that she had officially sound to record label will stop

In 2014 she costarred in the comedy Blended as Adam Sandler’s character’s daughter.She did many films – Alexander and the Terrible, Horrible , No Good Very Bad  Day.

She Casted in U.S. dub The Frog Kingdom . In Alvin and the Chipmunks: The Road Chip she appeared as Ashley .

In 2017 , she joined black comedy film Assassination Nation. She appeared in Netflix Original film ‘You Get Me’.

In 2018 she appeared in romantic drama Midnight Sun. She contributed 5 songs Two soundtrack including lead single ‘Burn so Bright’.

She joined Only Fans In August 2020 and she was the first person to earn $1M in 24 hours of joining the platform .

She did many commercials including Neutrogena and Texas Instruments and many more advertising campaigns including Tommy Hilfiger ,Diesel , Guess Jeans ,Gap ,etc.

Thorne has been on many magazine covers of US’s Shape ,  Indonesia’s Cosmo girl and Marie Clarie.

In 2008 , she was nominated for Young Artist Award for The Best  Performance in a TV  Series.

In 2009 , She won Young Artist Award for Best Performance in a TV series ‘Comedy or Drama’ Supporting young actress for My Own Worst Enemy.

In 2011 , she won Young Artist Award for Best Performance in a TV series for Shake It Up.

In  2012 , she won Imagen Award for the Best Young Actress TV for Shake it Up.

In 2013 , she won  Young Artist Award for Best Performance in a TV, Movie , Mini Series as Leading Young Artist For Frenemies.

Bella Thorne has a net worth of more than $6M. She earned this income from many movies , TV shows and soundtracks. As she started earning at every early age , she soon became as star.