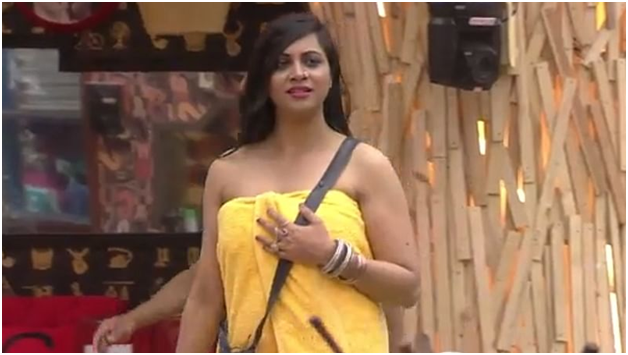 Bigg Boss 14 has been  a saga of dull vibes. To keep the TRP ratings sky high and to Spice up the things challenges from the previous seasons, were made to enter the Big B house for the season 14. And may be due to the same fact as she raised the question to Rubina and Abhinav Shukla whether this season of Big Boss was boring or not.

Talking about  Vikas Gupta , Arshi said that he should have been put into jail. Rubina explained that he is the captain of the house and has some privileges. To this Arshi adds, “Fir uski cheen Leni Chahiye“.Arshi was also spotted saying that “y kaisa captain hai jo poora din washrookm mein sota rehta hai?”

Arshi didn’t even spare Rakhi. According to her, what Rakhi was doing was not a part of entertainment and she is really fed up with her. According to her she always interferes in others’ matters and interrupts them by saying, “Mujhe bolna to padega naa, Mujhe bhi footage chahiye“. Listening to this, Rubina added that she had never listened to words like “gameplay”, “footage” and “promo katega” before.

Finally Arshi put up a laudable question to Rubina,  how did they manage to survive this long, and said, “Boring Laga ki nahi laga, boring tha kabhi?“. Abhinav agreed that before Aly Goni it was kind of boring. Rubina also added that the housemates didn’t talk to each other.

Do you also think that this season was the most boring one? Do let us know.