BB 14: RUBINA IS THE EYEBALL GRABBER 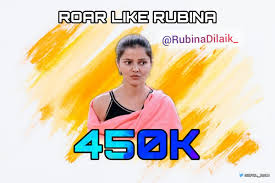 Nikki Tamboli and Rahul Vaidya were among one of the strongest contestant in the BB House, TRPs of Bigg Boss 14 saw an exponential drop. As a result, 6 wild card entries were proposed –Rakhi Sawant, Arshi Khan, Kashmera Shah, Rahul Mahajan, Mannu Punjabi, and Vikas Khanna. The new entries managed to lift the entertainment level of the Bigg Boss house. However contestants like Rubina Dilaik and Eijaz Khan are still firmly standing on their spot in terms of popularity and hero worship.

Rubina Dilaik and Rahul Vaidya are the most glorious and appreciated contestants. Their approach in the show is highly appreciated by the audience . In fact, after the weekends episode, #RoarLikeRubina was retweeted more than 1 million times, which is quite mind boggling . Not only viewers but Salman loved the way Rubina supported Vikas and spoke about the entire issue with crystal clear intent.”

Arshi, Rakhi and others have their own significance in the show and are keeping the audience glued to television, but they somewhere that special bond is missing . On the other hand, Rubina is very well expressing her viewpoint and coming out as a very mature player. She is maintaining a balance The same is for Rahul Vaidya, who re-entered the house last week, and instantly grabbed eyeballs at his place with his strong opinions and talks.

In nutshell, entertainment is still on. All members are playing their part efficiently. Let’s wait and see what happens next.