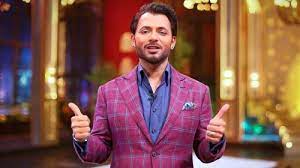 Anupam Mittal is the Founder and CEO of People Group (Shaadi.com). But now a days he is popular for his appearance in the Indian reality show named Shark Tank India as a Judge. There are many people who look at him as a business idol.

Anupam Mittal got married to the model, Aanchal Kumar in Rajasthan, India, on 4th of July in the year 2013.

The couple has a daughter.

Shaadi.com started in the year 1996 when Anupam Mittal was in United States and he had an idea to start a matrimonial. Shaadi.com has more than 30 million users and 3.2 million successful marriage stories. It is the first ever website over the internet in the whole world of this type.

Makaan.com is similarly a popular site about online estate over the internet and its short video application named ‘Mauj’ is also growing over internet.

After the success of Shaadi.com, Anupam Mittal founded People Group in 2001 making it the parent company of Shaadi.com and other brands like Makaan.com, Mauj Mobile.

Besides these startups, Anupam is an active investor and has invested in more than 150 companies as of 2022 such as Interactive Avenues, Sapience Analytics, Big Basket, Cafe Zoe, Ketto, Druva, Pretty Secrets, Peel Works, FarEye, TaxSpanner, Prop Tiger, etc.. He is also the founding member and past chairman of the Internet & Mobile association of India (IAMAI) and the founding Co-chair of H2 India.

Anupam has been voted as one of India’s 50 Most Powerful People by Business Week and has even been on the list of one of the 25 people to watch out for by ‘The Week’ Magazine.

Anupam invested around 1 crore rupees in OLA for 2% stacks in OLA.