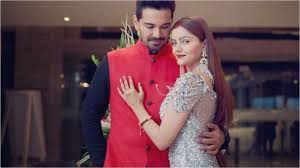 The previous night’s episode of Bigg Boss 14 was really heart rending and left the viewers in tears. The episode witnessed a heartbreaking moment when Abhinav Shukla and Rubina Dilaik had to part ways in the show as the former got evicted. The couple who has had their share of ups and downs during their journey together in the show broke down as they bid adieu to each other.

But a heart-touching moment was seen later when Rahul Vaidya’s connection Toshi Sabri went up to Rubina to let out all his feelings about the bond that a husband and wife share. He spoke to Rubina and said that though he is unaware of their story outside, he is touched with their bond that he has got to see on the show.

Toshi expressed how looking at Abhinav and Rubina togetherness has made him realise the importance of his wife and his relationship with her. Conveying his heartfelt feelings, Toshi said that he would profess all his feelings to his wife once he goes out. Talking about how a wife compromises, sacrifices and does every possible thing for her husband out of love, Toshi expressed how he has realised the importance of the relationship of a husband and wife that he has lived for seven years now.

Rubina who was overwhelmed to hear this told Toshi that a person should always convey his feelings to his beloved and not keep it to themselves. The singer then blessed Rubina and wished her luck for life. He said, “Aapki jodi barkarar rahe aur aap dono pyaar karte rahein is hi tarah ek dusre ko.