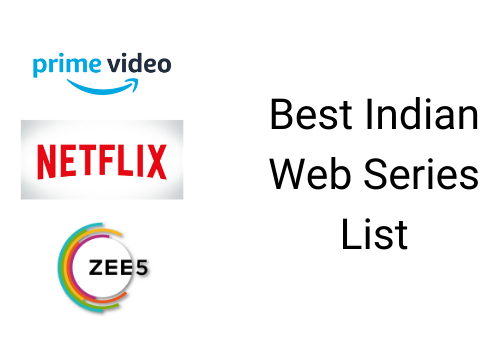 The OTT platforms are emerging as the leading source of entertainment for the users. In the recent past, various platforms have come up to provide more and more choices. Based on the top platforms, we have prepared this Best Indian web series list.

Amazon Prime Video, Netflix, Zee5, Altbalaji are the leading sources for original content. In addition to that, you can also watch the Indian web series on Youtube.

Today, we bring the top Indian web series list to keep you entertained

The action-drama series on Prime video has Manoj Bajpayee and Priyamani in lead roles. The Family Man is a story of a middle-class man secretly working as an intelligence officer. The series premiered on prime video in September 2019. The family Man series is renewed for a second season which is slated to release by end of 2020.

The 2019 series is available on The Viral Fever. Kota Factory is the story of young students moving to Kota. The city is popular as a hub for coaching centres where students come from all over India to prepare for entrance exams. The Indian series highlights the problems of entrance exam aspirants.

The web series created by TVF consists of 5 episodes. TVF Pitchers premiered in June 2015. The Indian series is also available on YouTube. TVF Pitchers, is the story of four friends and their start-up dream. They enter the business world with their own start-up company. The season one of the show includes a total of five episodes.

Hostel Daze is a new age campus show. The web series captures the life inside the hostel of an engineering college in India. Hostel Daze came out in December 2019. The adult comedy-drama series comes from the makers of Kota Factory. The TVF series is exclusive to Amazon Prime Video. The light-hearted show is about the misadventures of young students as they learn to service in a hostel.

Bard of Blood is a spy thriller series based on Bilal Siddiqi’s novel of the same name. Bard of Blood is produced by Red Chillies Entertainment. The Series has Emraan Hashmi in the lead role.  The star cast also includes Kirti Kulhari, Vineet Kumar Singh, Jaideep Ahlawat and Sobhita Dhulipala. Bard of Blood tells the story of an ex-RAW agent. The spy thriller premiered on Netflix in September 2019.

Directed by Tigmanshu Dhulia and Vishal Furia, Criminal Justice released on Hotstar on 5th April 2019. It is based on BBC drama series of the same name. Criminal Justice has Jackie Shroff, Vikrant Massey, Pankaj Tripathi, and Anupriya Goenka in the lead roles.  The season one includes a total of 10 episodes that you can watch with Hotstar Premium subscription.

Inside Edge is the first Indian original series of Amazon Prime Video. It premiered on 10th July 2017. The Indian series is based on a fictional T20 cricket team. The star cast of Inside Edge includes Vivek Oberoi, Richa Chada, Angad Bedi, Siddhant Chaturvedi, and Tanuj Virwani. The original series was also nominated for in Best Drama category at 46th International Emmy Awards. Recently, the second season of Inside Edge came out on Amazon Prime Video.

18. Avrodh the Siege Within

19. Breathe: Into the Shadows

How to Watch Indian Web Series For Free?

Which are the best Indian web series?

Sacred Games, Mirzapur, The Family Man, and Paatal Lok are some of the best Indian web series to watch. With the growing presence of digital platforms, the viewers have more choice. The OTT platforms such as Hotstar, Sony Liv, and Zee5 add to the choices available online.

Which is the most popular web series?

Sacred Games is possibly the most popular Indian web series. Mirzapur is also very popular. In addition to that, I think The Family Man is also very highly rated web series.

Which is the best Indian web series on Netflix?