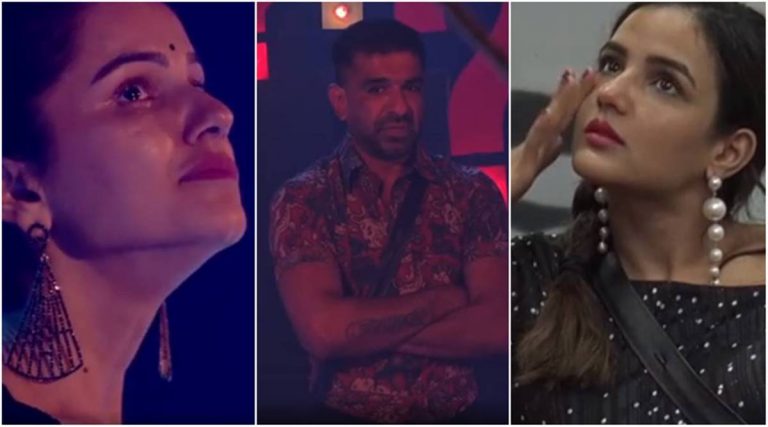 Housemates get a chance to win Rubina’s Immunity Stone

1.We were about to Divorced – RUBINA

Task starts with Rubina. Rubina Dilaik confess that she was about to get separated from Abhinav if they wouldn’t have come to Bigg Boss. She adds their divorce was about to get happen in the month of November. Rubina cries out loudly.

2. Eijaz opens up on why he has issues with Someone’s touch

The buzzer rings and Eijaz goes to the theater area to reveal his ‘big secret.’ Eijaz reveals that during his childhood he was molested, and thus he has a problem with ‘touch.’ He shares that he had forgotten the incident, but it was triggered again when he started therapy for his anger issues. Eijaz can’t control his tears as he apologizes for not telling his father before. Bigg Boss lauds Eijaz for gathering the courage to speak about it.

Jasmin reveals about her secret and tells she had marks on her face and body thus, she got many rejections than she attempted suicide by taking overdose of medicines. BB praise Jasmin for revealing her secret.

Rubi asks Abhi if he will give her second chance, she says she can’t afford to lose him. Abhi agree. Abhinav gives Rubina a warm hug as she gets back after the revelation, she thanks him for giving her a ‘second chance.’ Rubina and Abhinav are tensed about their parents’ reaction on the same, and they get emotional.Rubina and Abhinav continue talking about their separation, and the latter reveals that he feels ‘bad.’ But, Rubina tries to make him understand that they will grow stronger together.

Aly, Abhinav, Rubina, Rahul, and Jasmin back Eijaz for revealing his ‘darkest secret,’ and say that he was deeply affected after her mom’s demise. The majority supports Eijaz, and he wins the immunity stone. Eijaz becomes the first finalist of Bigg Boss 14, amid the tense and emotional atmosphere of the house. The remaining contestants get nominated, i.e. Rubina, Abhiva, Jasmin, Aly, Kavita, Rahul, and Nikki.