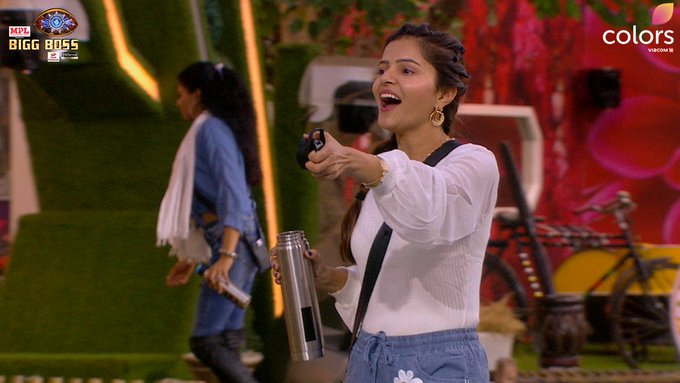 Rubina asks Kavita to assign breakfast and dinner duty to someone else. Kavita asks her to give the reason. Rubina says she has problem with her captaincy thus, she wants to switch her duty. Kavita says to Nikki that Rubina is standing with wrong.There, Rubina says to Eijaz, Kavita says to everyone ‘who is he/she’?Kavita asks Rubina not to enter the kitchen if she is not preparing food. Rubina asks Kavita to be leader not dictator.

Buzzer rings and task starts. Rubina and Jasmin face-off happen over the kitchen issue. Kavita asks both to keep their point of view. Jamsin raise the point that Rubina don’t deserve Kitchen area because she refused to prepare the food today.Later, at the end of the first round, the kitchen and dining area goes to Jasmin and her family.

Nikki brawls with Eijaz and Pavitra

Eijaz looks for water bottle. Nikki asks Eijaz to go. Eijaz gets adamant to stay back at kitchen hearing Niki. Pavitra asks Eijaz to go. Nikki says Pavitra is not visible then she is trying to fetch attention. Pavitra and Nikki argue with each other.

Kavita welcomes both the teams. Rubina and Jasmin stands against each other to argue for bedroom area. Rubina starts the task and keep her point of view. Jasmin and Rubina argue with each other.But given that Nikki did not clean the captain’s room this morning, Kavita rules out in favor of Rubina’s team and the area goes to that family.

Team Rubina discuss whom to allow to sleep in the bedroom.Niki says her reason was not valid as she mentioned she don’t want to be biased thus gave bedroom to Team Rubina.Abhinav asks Jasmin to give onion for eating salad. Jamsin says onion is not essential and will not give same like iron is not essential for Nikki. Abhi refuses to give iron to Nikki.Jamsin asks Nikki if she has make-up kit. Nikki says she already fetched it and now thinking to fetch make-up brush. Jamsin says Pavitra don’t sleep whole night.